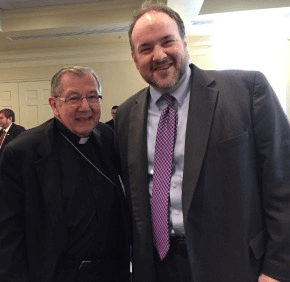 After passing the House of Delegates but failing to advance for a vote in the State Senate during the 2016 legislative session, the Maryland Healthy Working Families Act is back in 2017, seeing spirited debate Feb. 9 and 10.

Bishop Denis J. Madden, auxiliary bishop emeritus of Baltimore, testified in favor of the proposal, which would require employers of 15 or more to allow their employees to earn paid sick leave, and employers of 14 or fewer to allow unpaid leave.

“Several years ago, my fellow bishops and I issued a statement on the dignity of work, which is based on the Catholic Church’s social teachings – one of the pillars of those social teachings,” he said before the House Economic Matters Committee Feb. 10. “At that time, we said, ‘It is in the best interests of all to enact reasonable policies that keep our workplaces healthy by allowing workers to stay home when they or their dependent family members are sick, without undue penalties.’ That statement holds true today as it did when we first presented it.”

She called it a “moral issue” which she acknowledged is “difficult.”

“We have Catholics in our own community, small business owners, who are very angry at us for supporting this issue,” she said, “but that’s the balance we need to look at.”

In addition to sick leave, the bill would allow workers to use the same earned time – at least one hour for every 30 worked – for “safe leave,” to be used to cover an absence due to domestic violence or abuse or to assist a family member who has suffered the same.

Del. Luke Clippinger, a Democrat representing part of Baltimore City and primary sponsor of the bill in the House, said that after he was diagnosed with a rare form of leukemia during the summer, he was “fortunate” that the Anne Arundel County State’s Attorney’s Office, where he serves as Assistant State’s Attorney, offered the paid sick leave he needed to recover.

Dr. Leana Wen, Baltimore City health commissioner, testified in favor of the bill before the Senate Finance Committee, noting that, as an emergency physician, she saw the consequences of forgoing treatment for fear of losing pay.

“I can tell you about the 24-year-old construction worker who scraped his leg,” she said. “It developed into a severe infection, and he ended up in the hospital on IV antibiotics and had his leg amputated because he waited.”

“I can tell you about the hundreds of people I’ve treated who had the flu and infectious diarrhea and went to work anyway, and ended up infecting their coworkers and families,” Wen added.

Many also testified against the bill.

Mike O’Halloran, Maryland director for the National Federation of Independent Businesses, told the Senate Finance Committee that the bill “is unworkable to the business community.”

“Those that do not offer this benefit do not because they cannot,” he said. “That’s a simple fact.”

At the same hearing, Kevin Daly, president and CEO of TurboHaul, a junk- and bulk trash-removal company, said there are few benefits, but also “no qualification, no certifications, no skills and no experience” required for entry-level “helper” positions at his company.

“People come to TurboHaul because there is an opportunity – a start into the workforce they can find nowhere else,” he said, going on to note the stories of several former helpers who have become higher-level employees with higher incomes and more benefits.

He said that if it became too expensive to hire people for such entry-level positions, he would consider technology and machinery, such as a grappling train mounted to trucks, instead.

Russell testified that the bill was a reasonable compromise.

“You may not hear this a lot, but we’re here to pray for you,” she told legislators, “that you make the right decision on this issue, and we hope you consider the low-income workers who so need the benefit of this legislation.