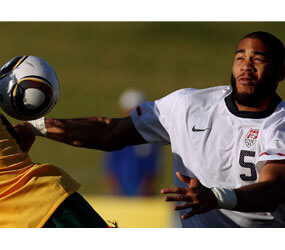 DAMASCUS, Md. – When the U.S. men’s national soccer team takes the field in South Africa June 12 to face England in the World Cup, parishioners from St. Paul Parish in Damascus will be rooting for one of their own.

Defender Oguchi Onyewu, 28, attends Mass at St. Paul when he is home with his parents, Peter and Dorothy Onyewu.

The Onyewus also have two other sons and two daughters. The family has belonged to the parish in suburban Washington since 2004, said Sherrie Wade, parish director of social concerns.

“It’s very obvious their faith is important to them,” she added.

Wade recalled a gathering at the Onyewu home two years ago, when more than 100 people from the parish attended, including children who brought soccer balls for Oguchi to autograph. The soccer standout was “very kind, very patient with all the parishioners,” Wade recalled in an interview with the Catholic Standard, newspaper of the Washington Archdiocese.

On a recent Sunday, Father Joseph Pierce, St. Paul’s pastor, announced that Onyewu would be participating in the World Cup.

“Now there is a lot more interest and excitement in the community,” the priest noted. He also urged the parishioners to pray for Onyewu as well as cheer for him.

This will be the second World Cup for Onyewu as he attempts a comeback in international play after an serious knee injury sustained in the final World Cup qualifier against Costa Rica at RFK Stadium in Washington last October.

His mother was in the stands during that game and told Wade she was a “nervous wreck” until her son gave her the OK sign from the field. Onyewu required surgery and has been training ever since to get back to full health in time for the World Cup.

Onyewu, whose full given name, Oguchialu, means “God fights for me,” lists his hometown as Olney. He helped the United States to its fourth-place finish in 1999 in the Under-17 men’s world championship. Two of his teammates in that match are still his teammates – Landon Donovan and DaMarcus Beasley.

In 2008 and 2009 Onyewu, who also holds Belgian citizenship, helped the Belgium First Division team Standard Liege win back-to-back league titles. Onyewu signed with Italy’s soccer club in AC Milan last summer. He debuted in the second half of a game in late September, but his October injury prevented any other league play.

His international play has benefited him in other ways, such as helping him becoming fluent in many languages, said Wade, who asked Onyewu at Christmas if he had learned any Italian. Wade said she was surprised when he said he already could communicate in Italian and was enjoying the new team.

Onyewu’s father played soccer in Nigeria before moving to the United States to attend Howard University in Washington. Wade said both parents are proud of Oguchi as well as his brothers and sisters, one of whom is a doctor at Washington’s Children’s Hospital.

The close-knit family attends Mass as well as special events at St. Paul Church, said Wade. She said the family always participates in a Thanksgiving service, with the children standing up each year and stating their gratitude for their faith and family.

Wade was excited to cheer on Onyewu – No. 5 – in the World Cup. At 6 feet 4 inches tall, he will definitely be a presence for the U.S. team.