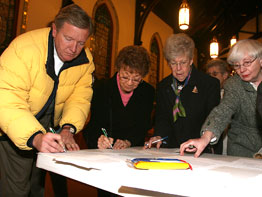 ANNAPOLIS – The Maryland Catholic Conference is asking state lawmakers and Gov. Martin J. O’Malley to support the Pregnant Women Support Act, legislation that would partner the State of Maryland with non-profit organizations to help women in crisis pregnancies.

Based on a much-touted Pennsylvania program administered by Real Alternatives, Inc., the proposed Maryland program would help women who want to keep their babies rather than abort them. Money for the program would be earmarked for the Maryland Department of Human Resources, which would contract with Real Alternatives to give funding to pregnancy centers, maternity homes, adoption agencies and other organizations that support pregnant women and their families.

“I really think we’re entering a new era when people can work together for the common good of children,” said Nancy Paltell, deputy director for the MCC’s respect for life department.

“No matter what side you take on the abortion issue, everyone agrees it’s laudable to help women and reduce the abortion rate,” she said. “This program does both.”

Enabling legislation that establishes the Pregnant Women’s Support Act will be introduced in the coming weeks, and the MCC is calling on Gov. O’Malley to include money in his budget to support a pilot version of the program for Baltimore City and two surrounding counties. The pilot program would cost about $800,000 and would help more than 1,500 women, according to Ms. Paltell.

Catholic parishes throughout Maryland have begun a letter-writing campaign, asking the governor and lawmakers to support the program. They hope to collect 100,000 letters to deliver to state leaders early in the legislative session, Ms. Paltell said.

Rick Abbruzzese, a spokesman for the governor, said the administration was not aware of the proposed program until contacted for comment by The Catholic Review.

“The governor will take a look at the program in the coming weeks and months,” said Mr. Abbruzzese, noting that the governor is in the final stages of preparing his budget.

As a candidate for governor, then Mayor O’Malley told the state’s bishops he was open to the possibility of providing assistance to women who choose to have their babies.

“All of us agree that we need to reduce the number of abortions in our state, and there are multiple ways of doing that,” he said in a 2006 interview with the board of governors and administrative board of the Maryland Catholic Conference covered by The Catholic Review.

The candidate added that “we cannot make it harder for people who choose to bring life into this world.”

“I believe in it because for over 20 years I have operated a company where I have seen first hand the same women about whom this bill impacts,” she said. “I can speak first hand from experience the need for such a bill.”

Ms. Paltell said the Pregnant Women’s Support Act is desperately needed in Maryland because there is currently no state program to provide crisis intervention counseling to women dealing with unplanned pregnancies. Neither is there a state program to offer alternatives to abortion, she said.

That contrasts sharply with the millions of dollars that are spent annually on abortion services and family planning. The state gave about $6 million to Planned Parenthood last year, according to Ms. Paltell. In the budget, approximately $13 million was designated for family-planning services, she said.

“A woman who has no job, no place to live, little money, no health care and no family support may feel abortion is her only option,” she said. “This program is all about empowerment. It’s about real choice.”

Ms. Paltell emphasized that the Pregnant Women’s Support Act would not duplicate services already offered by the state. Non-profit groups will act as subcontractors with Real Alternatives to help women understand what services are available. Clients will also have access to crisis intervention counseling and their children would be eligible to benefit from the program through the first 12 months after birth, she said.

Ms. Paltell noted that federal money can be designated for the program, which employs a fee-for-service model. Every hour spent working with a pregnant woman would be reimbursed at a pre-set rate, she said. Such a system gives incentives for pregnancy centers to serve more clients, hire more counselors and help more families, Ms. Paltell said.

“We could see a marvelous snowball effect,” she said.

The program would save Marylanders money in the long run by helping women provide for their children’s pre-natal care, Ms. Paltell said, as well as immunization for their children. A pilot program serving 1,500 clients could result in a potential savings of $21.9 million, she said.

Abortion service providers would not be eligible for funding under the program.