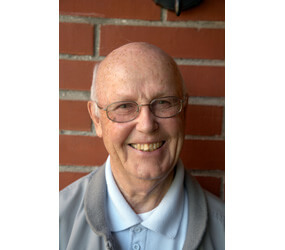 Maryknoll Father James Lawrence Schanberger, a Baltimore native who encountered Blessed Mother Teresa during a priestly career that took him to Asia and South America, where he continues to minister, marked the 60th anniversary of his ordination June 11.

Raised in a Forest Park family that produced three Mercy Hospital nurses, a physician, a psychologist and an officer in the U.S. Air Force, Father Schanberger graduated from All Saints School in Forest Park.

From 1936-42, he attended St. Charles College, a former minor seminary in Catonsville. After studying at St. Mary’s Seminary, he entered the Maryknoll Seminary in New York in September 1943.

He began his Maryknoll novitiate in Bedford, Mass., in September 1944. He received a bachelor’s degree from Manhattan College in 1950 and earned a Masters of Arts in Christian Spirituality at Creighton University.

His mission gave him the blessing of giving priority service to the poor, the sick, the abandoned and marginalized. His parishioners struggled to raise families while confronting unemployment, drugs, alcoholism, divorce, teenage pregnancy and social unrest.

From 1974-79, he served as rector of the Maryknoll Major Seminary in New York.

In October 1979, Father Schanberger arrived in Calcutta, India, where he waited 14 months for a visa to Bangladesh.

While in Calcutta, in what he describes as the “high point of his mission,” he met Mother Teresa and assisted her work. He remains extremely grateful for the “the great blessing of working with her community in their efforts to serve the very poor and abandoned.”

From 1980-94, Father Schanberger served at the Holy Spirit parish in rural Tuital, Bangladesh.

In Bangladesh, he enjoyed the “wonderful experience of serving Catholic families and witnessing their desire to live in peace with and have respect for the Muslim and Hindu communities.”

Father Schanberger continues his mission today in a parish of 45,000 outside Santiago, Chile.

His life as a priest wascelebrated in ceremonies at Maryknoll, N.Y., June 28-29. A Mass in his honor will also be celebrated at Stella Maris in Cockeysville July 19, at noon.

Fitzpatrick, the nephew of Father Schanberger, lives in Towson.