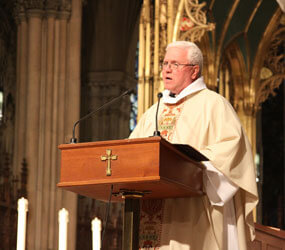 NEW YORK – Maryknoll is the gift of mission that the church in America gave to the universal church, and will continue to give, Cardinal Theodore E. McCarrick told more than 1,800 participants at a festive Mass at St. Patrick’s Cathedral Oct. 30.

The Mass celebrated the centennial of the group formally known as the Catholic Foreign Mission Society of America.

Cardinal McCarrick said the men and women of Maryknoll recognize that when you have something as precious as the Gospel of Jesus Christ, you can’t keep it to yourself. The gift of mission is meant to be given to one another.

Cardinal McCarrick, retired archbishop of Washington, was the main celebrant of the Mass that marked the official end of Maryknoll’s yearlong centennial commemoration. He was joined by 56 priests and eight bishops in a two-hour service rich with symbolic reminders of the lands catechized by Maryknoll missioners since 1911.

Maryknollers carried the flags of 47 mission sites in the processional. They represented countries in Asia, Africa, North, Central and South America. The processional cross held relics of Maryknoll founders and missioners.

The Maryknoll Centennial Choir sang the “Missa ad Gentes” (“Mass to the Peoples”), composed for the centennial by Father Jan Michael Joncas. Prayers of the faithful were offered in English, Spanish, Swahili, Quechua from Peru, and two languages used in Taiwan: Hakka and Taiwanese.

In his homily, Cardinal McCarrick traced his relationship with Maryknoll to a missioner’s visit to his third-grade class at Incarnation Parish in Manhattan. He said he and his classmates did not yet understand the depth of their faith, but recognized the priest’s bravery and dedication and appeared willing to follow him immediately into mission in exotic places. More recently, on June 4, Cardinal McCarrick ordained Father Rodrigo Ulloa-Chavarry, whom he called “Maryknoll’s centennial priest.”

“There is no turning back from proclaiming the Gospel,” Cardinal McCarrick said. “Every ear must hear.”

“The next century of Maryknoll is upon us and will be filled with challenges,” including vocations, he said. “Let us not hesitate to seek those vocations and make sure we have an answer when the Lord asks, ‘What have you done with my message?’“

Maryknoll Superior General Father Edward M. Dougherty said the centennial Mass celebrated, “the spirit of partnership in our shared Maryknoll journey, as we embrace the spirit of mission, the gift of sharing the gospel in all those countries whose flags led our processional today.”

Father Dougherty said Maryknollers worked side-by-side with those in need to provide health care, advance peace and justice and share the good news of Jesus Christ.

He said Maryknoll’s efforts are a “living mission outreach of the U.S. Catholic Church. In this mission, we have been blessed to see firsthand … those often overlooked, the marginalized, refugees, people suffering from HIV/AIDS, farmers, men, women and children.”

Father Dougherty said those called together by the gift of mission serve and affirm the value and individual worth of all people.

“Maryknollers are touched by the triumph of the human spirit and enriched by encountering people’s faith experience. We witness together with peoples around the world … the healing, reconciling and liberating Jesus and we are connected by the call of compassion,” he said.

Father Dougherty said Maryknoll missioners “have gone to places where they were needed and not wanted, and stayed until they were wanted and not needed.”

“We will continue to seek first the kingdom of God, to look to the future with hope-filled anticipation and to keep alive the flame of mission. When we serve others and witness the Gospel, we continue the mission Jesus began,” Father Dougherty said.