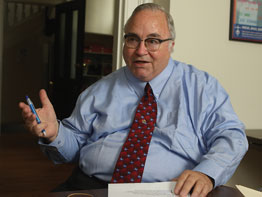 Brother Frank J. O’Donnell, S.M. was scared the first time he conducted a Scripture study for a group of men serving life terms at the Maryland Correctional Institute in Jessup.

Sitting on a hard folding chair on a hot summer night as a prison guard kept watch, the Marianist brother faced a room filled with men convicted of the most brutal crimes.

Brother Frank was fully prepared to do all the talking, until prisoners of all faiths eagerly jumped into the discussion, offering their own spiritual insights.

“I started to see them just as people and that was the safest place in the world for me – without a doubt,” Brother Frank said. “They were so appreciative of anyone who takes some interest in them, because so few people do.”

The humanity Brother Frank saw in those hardened criminals is the same humanity he is trying to get people to recognize in people on death row.

A passionate death penalty abolitionist who corresponds with a former death row inmate and who regularly carries signs protesting the death penalty in front of Baltimore’s Supermax prison, Brother Frank believes attitudes can only be changed if people recognize the dignity of every human life.

“I believe people can change, and I’ve seen people change,” Brother Frank said. “Even though this person did an evil act, he may have been sick at the time or out of control, but 10, 15 or 20 years later, he’s not the same person.”

An attorney, Brother Frank works in the state office of administrative hearings in Hunt Valley. He spent two years as a legislative aide to Del. Kenneth C. Montague Jr., then served as his special assistant when the Baltimore City Democrat was made secretary of the Department of Juvenile Services.

Brother Frank recognizes that many people have difficulty accepting his position on the death penalty. When he pickets with a group, carrying signs that read “Don’t kill in my name” and similar messages, some shout at him. Police officers have shaken their heads in disbelief, he said.

Others give supportive beeps of their car horns, or accept literature about the abolitionist movement.

The Maryland State Police has been accused of spying on protestors. Brother Frank called their alleged surveillance “definitely a mistake.” Abolitionists don’t break the law, he said.

Brother Frank said he was struck at the way the state police behaved at an execution about six years ago. He and other abolitionists gathered to hold a prayer vigil on the day of the execution.

“They bring out the state police to protect the 40-foot-high walls of the penitentiary,” he remembered, “like somehow we’re going to climb these walls and break in. It was very strange – bizarre.”

Brother Frank insisted that the way the death penalty is applied in Maryland is fraught with subtle racism. The men on death row were convicted of killing white people, he said, and there are geographic discrepancies.

“Should one county give the death penalty for everything and 23 other counties not?” he asked. “You never hear of a hit man on death row – a guy whose professional life was killing people. It’s because they have good lawyers and they raise money. The system has obvious flaws.”

In addition to visiting prisoners and providing information on the death penalty they can’t get behind bars, Brother Frank is active in a newly launched anti-death penalty initiative begun by the Marianist Social Justice Collaborative. The group lobbies against the death penalty in Annapolis and encourages Catholics to educate themselves on the issue.

Brother Frank said he is encouraged that Maryland has established a commission to investigate the death penalty. The group, whose appointees include Bishop Denis J. Madden, urban vicar, will hold its third hearing in Annapolis Aug. 19.

“Harboring revenge in your heart really corrodes your own heart,” said Brother Frank, expressing admiration for the families of murder victims who call for forgiveness.

Brother Frank recalled attending the funeral of a mother of more than 10 who was killed by a drunk driver. At the beginning of the liturgy, the husband stood and announced that he forgave the man.

“That drunk driver wasn’t out to kill his wife that day,” said Brother Frank. “He was sick. He was an alcoholic. The forgiveness shown that day always stayed with me. That’s what the Gospel calls us to do.”

Visitwww.msjc.net/deathpenalty to learn more about the Marianist campaign.