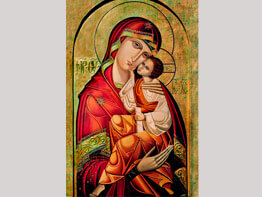 A vast iconography of traditional Christian art has been “censored by the modern age” because images depicting Our Lady’s naked breast for her child were deemed too “unseemly,” the paper said June 19.

Artists began depicting a fully clothed nursing Mary in sacred art in an attempt to make her seem less “carnal,” but the depictions unfortunately also diminished her human, loving and tender side “that touches the hearts and faith of the devout,” the newspaper said.

The article, titled “Those Marys, Too Human, Censored by the Modern Age,” was written by Christian historian Lucetta Scaraffia. It was one of two articles commenting on the release of a two-volume work documenting the variety in iconography and history of Mary. The work, “The Sword and Milk,” by Tommaso Claudio Mineo, was published recently only in Italian by Rome’s Pontifical Lateran University and presented to the public at a Vatican-sponsored event June 17.

The Vatican paper published the two commentaries in its June 19 edition along with a Renaissance portrait of Mary baring her breast, nursing a swaddled baby Jesus.

Salesian Father Enrico dal Covolo, a professor of classic and Christian literature at the Pontifical Salesian University, said in his commentary that a nursing Mary represents an interesting paradox: “He who gives nourishment to all things, Mary included, now lets himself be nourished by her.

“The Virgin Mary who nurses her son Jesus is one of the most eloquent signs that the word of God truly and undoubtedly became flesh,” he wrote. And it was only by becoming fully human that the Son of God could save humanity from sin and death, the priest wrote.

Ms. Scaraffia said that when the early Christian theologians wrote about and artists represented Our Lady breast-feeding they were showing “concrete proof” of God’s incarnation.

“Jesus was a baby like all others. … His divinity does not exclude his humanity,” she wrote.

This kind of Marian iconography can be traced back to Egypt and early Christian times, but it ends around the 16th or 17th century, both authors said.

Ms. Scaraffia wrote that the Protestant movement was quite critical of “the carnality and unbecoming nature of many sacred images.” Even though Catholicism rejected this view, the condemnations still affected the church’s approach to sacred art, as evidenced by artists later covering up the naked forms in the Sistine Chapel, she wrote.

The splintered views concerning the sanctity of the human body were not repaired and therefore an “artistic and spiritual rehabilitation” of a breast-feeding baby Jesus is needed, she wrote.

She said the sacred image of Mary nursing her child is “an image so concrete and loving” that it recalls her offering her body for nourishment and giving herself completely to her son as he offers his body and blood in the Eucharist and gave himself completely for others with his death and resurrection.