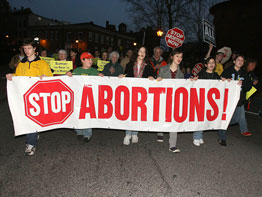 ANNAPOLIS – Carrying neon yellow glow-sticks and posters in support of pregnant women, hundreds of pro-life supporters marched through the streets of downtown Annapolis March 13 to call attention to the sanctity of life.

The public demonstration was part of the 29th annual Maryland March for Life, culminating in a rally at Lawyers Mall in the shadow of the State House.

Nancy Paltell, associate director for the Respect Life office of the Maryland Catholic Conference, told marchers the bill would have a “chilling effect” on outreach to pregnant women. The NARAL report was based on a collection of anecdotes by NARAL volunteers who visited 11 crisis pregnancy centers posing as pregnant women, Ms. Paltell said.

“The bill hurts women,” said Ms. Paltell, warning that women in need might turn to abortion if their trust in pregnancy centers is shaken. “It’s a mean-spirited attack.”

Among the information given by crisis pregnancy centers that NARAL finds objectionable is the fact that women who have abortions may suffer post-abortion trauma, Ms. Paltell said. Centers also inform women of the medical risks associated with the procedure, she said.

“If a woman has been abandoned because of an unplanned pregnancy, she may think abortion is her only choice,” said Ms. Paltell, noting that while the state spends about $13 million on family planning services, $6 million on Planned Parenthood and $2.5 million for Medicaid abortions, no money supports nonprofits that promote childbirth.

Crisis pregnancy centers are the only place for women to get the material, counseling and referral help they need, Ms. Paltell said.

Kristin Kline, who was homeless eight years ago after becoming pregnant at age 19, said she found help at a transitional maternity home in Howard County supported by the Gabriel Network.

“Every need was absolutely met,” said Ms. Kline. “I had food, a place to live, emotional support, support with my newfound Christian faith and transportation to work.”

Without the support of those services, Ms. Kline said, “I would have gone a different avenue.”

Before the march began, many Catholic participants filled the pews of St. Mary in Annapolis for a Mass celebrated by Archbishop Edwin F. O’Brien. A non-denominational Christian service was also offered at St. Mary High School.

In his homily, the archbishop reiterated the promises he made at his installation Mass to promote a culture of life.

“The right to life is the greatest civil rights issue of our time,” Archbishop O’Brien said.

He added that no one has to have an abortion and that the Catholic Church stands willing to help women in crisis pregnancies.

The archbishop thanked the many people who volunteer in crisis pregnancy centers and he encouraged pro-life advocates to keep working in support of life.

At the Lawyers Mall rally, Sen. Andrew Harris of Baltimore and Harford counties said there are currently 18 members of the Senate willing to filibuster to defeat anti-life legislation. Nineteen senators are needed to keep a filibuster going.

“We are one vote short from having 19 firmly pro-life senators,” he said. “When we have 19, we can stop anything like that pregnancy center bill that they want to bring to the floor of the Senate.”

Sen. Harris encouraged participants to work hard to elect at least one more pro-life senator. They also need to contact their lawmakers and make their voices heard about life issues now being debated, he said.

Monsignor James Farmer, pastor of St. Ursula in Parkville, noted that it took more than 150 years to end slavery in the United States and 70 years to end communism in Eastern Europe.

“We’ve been marching for 29 years, and you might wonder if we’ll ever win this battle,” he told cheering marchers. “We have to persevere. Someday God’s going to turn this around because God’s power is greater than the power of evil.”