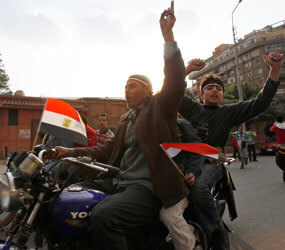 WASHINGTON – After the 18-day “revolution” of public protests that toppled Egyptian President Hosni Mubarak Feb. 11, the path ahead for the nation is a blank slate, with a wide range of political and economic paths possible, according to an expert on Egypt at the University of Notre Dame’s Kroc Institute for International Peace Studies.

As news was still getting out about Mubarak’s resignation, Patrick Mason, research associate professor at the institute and its “Contending Modernities” program, told Catholic News Service he thinks that Egypt’s way forward will be a form of civic nationalism that transcends ethnic, religious or other cultural identities.

The tone set during the weeks of protests in Tahrir Square in Cairo and in other locales was one of cross-differences collaboration, where the unifying point among the tens of thousands of activists was that of being Egyptian, not whether one was Muslim, Christian, Arab or some other type of identification, Mason observed.

That is a hopeful sign for the country’s beleaguered Coptic Christian minority, said Mason. Scenes from the protests of Christians forming a human shield between praying Muslims in the square and outsiders who might have tried to interfere, and of Muslims creating a protective ring around churches where Christians were praying inspired confidence that treatment of religious minorities can improve under a new government, he said.

At 10 percent of the population, Christians in Egypt have long faced discrimination and harassment.

A bomb attack on a Coptic Orthodox church in Alexandria Jan. 31 left 23 dead and 97 injured. Mason noted that Muslim leaders were quick to decry the incident and made a conspicuous effort of protecting the church and its people at Christmas celebrations Jan.7.

Religious leaders did not play a significant role in the protest campaign, according to Mason, and he said he wouldn’t expect them to be deeply involved in shaping a new government. Sheik Ali Gomaa, the grand mufti of Egypt, issued a statement supporting the protesters, but Mason said he otherwise apparently didn’t participate in the events.

A Coptic Christian leader urged the protesters to go home, he said.

“They have been tentative and cautious,” Mason said, “not at the forefront of the protests.”

The young people of Egypt feel allegiance to their religious leaders as part of their faith and society, he said, but that doesn’t extend to believing they should have political power.

Top religious leaders, particularly Muslims, have been closely associated with the institutions of the state, Mason said. Given those affiliations and the grass-roots nature of the protests, he said he’d expect religious leaders to be minor participants in reshaping the government.

Mason, who taught at American University in Cairo from 2007 to 2009, said he was personally very inspired by the news out of Egypt, but that such events were inconceivable when he was there.

In those days, he said, “I was very encouraged by my students,” and their aspirations for their country, although they were tremendously dissatisfied with the current situation and felt powerless to do anything about it. They looked forward to an end of repression and opening of society, but the notion of accomplishing that was inconceivable, he said.

The details of how Mubarak was finally persuaded to step down and exactly what role the country’s military would have were as yet unclear. Mason noted that Egypt’s military has long been a part of the status quo and its complex web of interests – it controls factories, hotels and other businesses and its leaders are well entrenched in the country’s elite.

Another professor with an eye on Egypt, Ghada Talhami, a Palestinian-born professor of politics at Lake Forest College in Lake Forest, Ill., said she was surprised at Mubarak’s exit. “I expected it to drag on until September,” the end of Mubarak’s term in office.

With Mubarak gone, said Talhami, who has published four books on Egypt, “there is hope for Gaza, definitely.” The Gaza Strip is nestled between Egypt and Israel, and Israel has blockaded many basic supplies from reaching Gaza for the past year. A blockade-busting supply convoy was attacked by Israeli commandos last May, with nine killed.

Talhami said Egypt’s change in leadership may make it possible “for Egypt to play a larger role in bringing the Israelis and the Palestinians together. The Egyptians have acted under Mubarak as if they had no leverage in this situation.”

It would be best if Egyptians, who protested en masse for more than two weeks, were to “go back to the everyday business of normal living,” Talhami said. She added that needed reforms included dismantling the Egyptian parliament, allowing all political groups to form and run for office, and setting an election date.

Reese Erlich, author of “Conversations With Terrorists: Middle East Leaders on Politics, Violence and Empire,” said Egypt could be “a shining example of democracy in the region.”

Changes also may lie ahead for the region’s relations with the United States, he said.

Egypt, Lebanon, Tunisia, Yemen and Jordan are nations where new leaders may shun the current model of U.S. alliances, he said.

“Not that they’re going to be run by extremists,” Erlich said, but discontent with U.S.-backed Egyptian-Israeli relations was one element that sparked the discontent in Cairo.