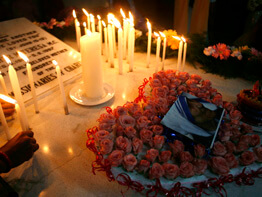 CALCUTTA, India – It was still dark, almost an hour before sunrise Sept. 5, but the freshly decorated white marble tomb of Blessed Mother Teresa of Calcutta gleamed as the feast day of the nun began.
Activities began early in the morning with the arrival of more than 150 women, men and children from slum areas where Mother Teresa had begun her mission among the poorest of the poor. They moved, each with a lighted candle, praying the rosary in the local Bengali language and singing Bengali and Hindi songs praising God and Mother Teresa, reported the Asian church news agency UCA News.
Some played percussion instruments, some swayed to the music, while others clapped as they walked past the tomb that sits inside the headquarters of the Missionaries of Charity congregation where the Nobel Peace Prize laureate once lived.
The activities marked the 10th anniversary of the death of the world-renowned nun, who lived in this eastern Indian city of Calcutta.
The tomb, adorned with flowers and the words “Happy Feast, Mother” formed with yellow marigold petals, was lit up by the glow of candles held by people who came for the morning program.
People sang, some breaking down in tears, as they asked the help of the nun many considered a saint before her death in 1997.
Archbishop Lucas Sirkar of Calcutta led the 6 a.m. Mass in the motherhouse chapel with 12 priests. The chapel was crowded with Missionary of Charity novices, all in white, professed nuns in their blue-bordered white saris, religious brothers, priests and people of different religions. Mother Teresa started the Missionaries of Charity in 1950.
The archbishop asked the congregation to meditate on the words Mother Teresa spoke or wrote. “They were very simple,” but revealed a person of great depth, he said.
After the Mass, the novices walked down to the courtyard and sang “Happy feast day, mother, and may God make you a saint” before a huge picture of her. The picture had been displayed at St. Peter’s Square when Pope John Paul II beatified Mother Teresa Oct. 19, 2003, at the Vatican.
Sister Nirmala Joshi, Mother Teresa’s successor, told the gathering she was “overwhelmed with joy” and “a great feeling of gratitude for what God has given to each one of us, especially in Calcutta,” through Mother Teresa.
She wanted all to “pray to mother to instill in us love for God and all his children, especially the neglected, poor and those who have nowhere to go.”
In an August interview with UCA News, Sister Nirmala said the Vatican has cleared most formalities for declaring Mother Teresa a saint. All that is required is “one more miracle” through Mother Teresa’s intercession, she added.
When a reporter asked Sister Nirmala if everyone experiences the “crisis of faith” that Mother Teresa had, as revealed in a recently published book, “Mother Teresa: Come Be My Light,” she said, “Only those of an advanced level of spirituality” experience this.
Sister Nirmala called it a sign of being close to God. It is like being close “to the sun and so blinded by the brilliance,” she added.
At the tomb, people continued to pray. Harihar Sahu, who was born blind and a Hindu but later became a Protestant, sang his own composition at the tomb. The nuns said he regularly visits on Mother Teresa’s birthday and feast day. People from the slum area where Mother Teresa began her work also visited the tomb.
Namita Biswas wailed loudly as she asked Mother Teresa to help her. Agatha Stevens, another woman from the same area, told UCA News she always is grateful to Mother Teresa, whom she had known since childhood.
The Missionary of Charity nuns prepared for the feast with a special novena, nine days of prayers, and daily Mass at the tomb starting Aug. 27. The archdiocese celebrated Mass in English and in Bengali at Mother Teresa’s Christ the King Parish.