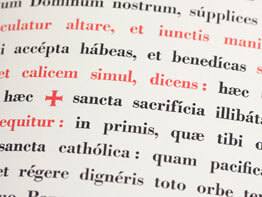 It was during a trip to Poland more than 15 years ago when Father Michael Roach last celebrated the traditional Latin Mass – only the third time in his 37-year priesthood he had celebrated the liturgy he knew from his youth.

After brushing up on his Latin, Father Roach will once again celebrate the “extraordinary form” of the Mass when the pastor of St. Bartholomew leads his congregation in a 2 p.m. liturgy on Pentecost, May 11.

“It’s a wonderful irony that we’re going to use the old rite in the newest church building in the archdiocese,” said Father Roach, noting that St. Bartholomew’s new church was dedicated in December 2006.

The special liturgy will be a regional event involving other parishes, Father Roach said, and came about at the encouragement of archdiocesan leaders.

A musical group from St. John in Westminster will assist with chant for the liturgy, which will include a sung sequence.

In a July 2007 decree, Pope Benedict XVI said Mass celebrated according to the 1962 Roman Missal, the traditional Latin Mass, should be made available in parishes where groups of the faithful desire it. He also said the Mass from the Roman Missal in use since 1970 is the ordinary form of the Mass.

Monsignor Robert Jaskot, chancellor of the Archdiocese of Baltimore, called the regional celebration of the extraordinary form of the Mass a “first step” for the Baltimore archdiocese. The rite is celebrated every week at the Shrine of St. Alphonsus in Baltimore.

“It’s the intention of the archbishop to make this extraordinary form available,” he said. “We want to make sure we do things correctly and we do them well.”

Monsignor Jaskot noted that it takes special training to make sure priests are prepared to celebrate the liturgy properly. Not only is the rite said in Latin, it also involves particular gestures and rubrics that must be learned.

Archbishop Edwin F. O’Brien is looking at how the extraordinary rite can be made more available, said Monsignor Jaskot.