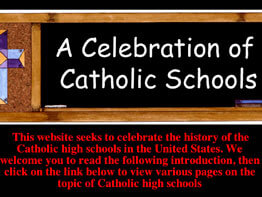 NEW YORK – If you’re a 1943 graduate of Immaculate Conception Academy in Davenport, Iowa, and you lost your class photo, you’re in luck. Rita Piro has a copy.

In March Ms. Piro launched catholicschooldays.com, a Web site documenting U.S. Catholic high schools from about 1900 to the present day. The bulk of the site is devoted to memorabilia from schools that have closed, like yearbooks, newspaper articles and vintage photographs.

Ms. Piro came up with the idea in 2007 after writing a book on the history of her alma mater, the Mary Louis Academy in Jamaica Estates, N.Y., where she chairs the foreign languages department.

“What has struck me the most is that people have all had the same reaction: Their experience has been so different from what is portrayed,” she said. “Catholic school was such an important thing, and they’ll say, ‘If it weren’t for them I wouldn’t be the person I am,’ rather than, ‘I remember this one, she used to hit me.’ That’s what you hear from the stereotypes,” said Ms. Piro.

She said she has listed every Catholic high school that existed in 1965, and about 90 percent of those before 1965. Schools currently in operation have their own section, with links to Web sites and Wikipedia entries.

The “Vintage News and Photos” section includes artifacts from schools both open and closed. “Nun Better” offers information on female congregations and their habits, and “The Catholic Alphabet” features Latin phrases and Catholic school prayers.

Ms. Piro pored through diocesan records, church archives and local newspapers for most of her content. Examples of her sleuthing include a 1960 Associated Press story headlined “Catholic School Curbs Youths Who ‘Go Steady’“ and a 1928 article on St. Benedict’s Prep School of Newark, N.J., winning the Catholic school football championship.

Ms. Piro does not accept advertising, preferring to pay for Web hosting and other expenses herself. She trolls eBay daily for yearbooks, class rings and other artifacts, even hitting upon an 1898 school newspaper from Roman Catholic High in Philadelphia.

As the site has picked up traffic, with more than 34,000 visitors since its debut March 24, Catholic school alumni have sent in contributions, which Ms. Piro photographs or scans and then posts. Some also send in historical information and personal reflections.

Ms. Piro said she has received the most material from Pennsylvania and Ohio, with Illinois, Indiana, Kansas, New York, California, Texas, West Virginia and Michigan also making a strong showing.

“They say nostalgia kicks in around 50, 55, so you have a lot of boomers surfing the net. I have people telling me, ‘I put in the name of my high school, and this site came up.’ They’re happy to know the name of their school is somewhere for the record,” said Ms. Piro.

Those with material to contribute may e-mail Ms. Piro at: oripter@aol.com.