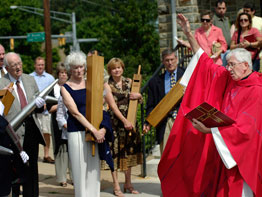 For months, Immaculate Heart of Mary, Baynesville music director Thomas Bozek had been anxiously awaiting the arrival of his church’s new pipe organ the way a father anticipates a baby.

When the Schantz Organ Company truck arrived Sept 14 at the parish, after traveling from Orrville, Ohio, with the church’s new addition, he wondered how its first cries would sound.

“We’ll never know until it’s assembled,” Mr. Bozek said after a noon Mass at the parish that included a dedication by Father Michael W. Carrion, the Immaculate Heart of Mary pastor. Before the Mass, parishioners processed with a few of the organ’s nearly 4,000 pieces, which had been unloaded from the truck parked on the church lot off Loch Raven Boulevard.

“I have some things in mind,” Mr. Bozek said proudly as he pondered sitting in front of the organ for the first time.

“My brothers and sisters, we have come together to bless this new organ,” Father Carrion said in his pre-Mass blessing. “It will be installed so that the celebration of the liturgy may become more beautiful in song.”

Over the next month, the $500,000 organ will be assembled in a retrofitted choir loft for the parish that was established in 1948.

The process to secure a new organ has taken nearly five years, but active parishioners worked tirelessly through various committees to raise funds, all while negotiating with various organ companies.

“I’m really looking forward to this,” said Michael Boehk, a co-chairperson of the parish’s Capital Campaign-Resounding in Praise committee. “It’s been so long in the planning. It’s been a big project.”

Shantz’s northeastern representative, Robert Better, said an organ “is the biggest investment a church can make.”

The church’s previous organ was often the source of frustration and humor.

“The old one, sometimes it would hit a pedal and it would stick,” Mr. Boehk said. “You could hear them up there fumbling to turn it off.”

Ed Kirsch, the leader of the parish’s organ committee, has never played the instrument, but realized how integral it was in the spiritual nourishment of the Mass.

“The organ leads the congregation in singing,” he said. “A piano does a fair job of that, but nothing like an organ.”

“Multiple documents have come out (from the Vatican) saying music is of paramount importance,” he said. “This will only aid in the participation of the assembly.”