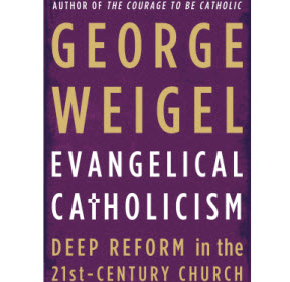 By Christopher Gunty
editor@CatholicReview.org
“Evangelical Catholicism: Deep Reform in the 21st-Century Church,” by George Weigel. Basic Books (New York, NY, 2013). 304 pp; $27.99.
George Weigel wants the church to play with fire, and he contends that such a fire will engulf the church in what he calls “Evangelical Catholicism.”
In his book of the same name released in February, the Maryland scholar and commentator on news in the church says, “Evangelical Catholicism calls the people of the church, laity and clergy, to a life in which friendship with the Lord Jesus is at the center of everything.”
For an evangelically Catholic life, everything flows from a belief in the Gospel. “Evangelical Catholicism is thus not a lifestyle choice: it is a life-changing process of lifelong conversion to the truth of the Gospel,” he writes.
Listen as Christopher Gunty, associate publisher of the Catholic Review and CEO of CRMedia, interviews George Weigel.
In a series of email interviews from Rome, where the Baltimore-born author was covering the papal transition for NBC News and other outlets, Weigel discussed his book in the context of the resignation of Pope Benedict XVI and the conclave that elected Pope Francis.
The book points out, “Lukewarm Catholicism has no future: submitting to the transforming fire of the Holy Spirit is no longer optional.” But in the book, he also says that “to wish for a new Pentecost is to play with fire.”
The faithful must be engulfed in flames if the church is to survive, “because what comes out of fire is refined gold, and its brilliance will make the church’s proposal more compelling in a world that is becoming spiritually jaded, even nihilistic,” Weigel said via email. “Refined gold is purified gold, and only a purified church can credibly proclaim itself as the spouse of Christ.”
He wrote the book well before Pope Benedict shocked the world Feb. 11 when he announced his resignation, so his premise was not dependent on the election of a new pope. In fact, he traces the changes seen today in the church not only to the Second Vatican Council, but also to the papacy of Leo XIII in the late 1800s.
Weigel said he is describing a change in the church’s engagement with the world that has been under way for 125 years: “the transition from the church of the Counter-Reformation to the church of the New Evangelization, or what I call ‘Evangelical Catholicism.’ That dynamic would have continued to unfold had Benedict XVI not renounced the Chair of Peter, and it will continue whoever his successor is.”
He points out that the neither the liberal/progressive approach to reform nor the traditional ways, can effectively set the world afire. Both Catholic left and Catholic right are stuck in the same old Counter-Reformation paradigm, in which institutional-maintenance is what the church is about,” he said. “At a different level, what’s called ‘progressive’ Catholicism has shown itself to be sterile, intellectually and in terms of attracting converts, and that shouldn’t be any surprise,” even though it will eventually lead to collapse.
“On the flip side, traditionalist Catholicism seems to me incapable of challenging, much less converting, the nihilistic culture of the West, which isn’t going to find its way to God through old-fashioned apologetics, or simplified Q&A catechesis, or lace surplices, maniples, and other forms of liturgical preciousness. We need new forms of apologetics, a far more biblically and sacramentally serious catechetics, and a beautiful – but not prissy – liturgy to invite post-moderns out of the sandbox of self-absorption.”
In the book, Weigel also makes the point that the new pope, whoever it would be, must be willing to alter the way the church is run, from the curia in Rome and outward. He told the Catholic Review the pope need not be Superman. Instead, he needs to be like St. Paul – a charismatic, engaging, evangelical missionary – but with the shrewdness to engage someone like Jack Welch (the business executive, author and management guru who for 20 years was CEO of General Electric) “to fix the Vatican bureaucracy so that it becomes an instrument of the New Evangelization, not an impediment to it.”
He believes that in Pope Francis cardinals chose a man “with Pauline qualities as an evangelist and witness,” and adds that from his own conversation with then-Cardinal Bergoglio in May 2012 in Buenos Aires, he thinks Pope Francis has what it takes to find himself “a Jack Welch, or perhaps better, a squadron of Jack Welches.”
In that interview, Weigel said, the future pope made clear that the global church must recover its missionary fever. “This is the quintessential pope of the New Evangelization,” he said, adding that the selection of the papal name in honor of St. Francis of Assisi indicates he may intend to rebuild the church, as Christ entreated St. Francis to do. “The name signals a program of fervent evangelization supported by deep reform,” the author said.
Christopher Gunty is associate publisher of the Catholic Review and CEO of CRMedia.
Also see:
Papal biographer: Fixing Vatican bureaucracy is a top job for next pope
Copyright (c) April 2, 2013 CatholicReview.org
PrevNext