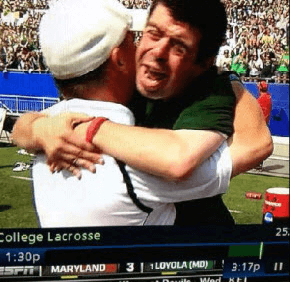 Charley Toomey has spent the majority of his life playing and coaching lacrosse. He can react instantaneously during a game.

But, mere seconds after the Loyola University Maryland men beat the University of Maryland for its first NCAA championship at Gillette Stadium in Foxborough, Mass. May 28, the seventh-year head coach was motionless.

“I can remember vividly, we won the national championship and I’m just stunned,” Toomey said. “I’m not running on the field. I’m just standing there taking it all in. When I turn around, there’s Darren on the full charge.

“That was when I was thinking, ‘It’s OK to celebrate.’ He probably released that first smile in me. In that moment, everything was right and Darren helped me realize that.”

Darren Artuso, 27 and a Greyhounds’ sideline staple for decades, leapt into Toomey’s arms and embraced him joyfully. It was captured on ESPN’s national telecast, but amidst the celebration, other storylines dominated.

That moment still lingers for Toomey and Darren, who has a rare neurodevelopmental disorder called Williams Syndrome, as the culmination of a dream.

“We did the impossible,” Darren said. “All the people doubted us over the last few years, said we couldn’t win and that it was impossible. I felt like I went to heaven after we won, like a big gorilla had gotten off our backs.”

After the hug, Darren’s Facebook page (he has more than 1,700 friends on the social networking site) was covered in screen grab photos of the hug. Text messages soon piled up.

“That picture is just getting posted everywhere,” his father, Joe, said.

A week after the championship, Darren was in a grocery store when someone asked: ‘Aren’t you the boy who was on TV?’ ”

Darren Artuso, folk hero. It’s not something Joe, Loyola’s assistant director of athletics and director of sports medicine, could have imagined when his wife Gretchen, now a physical education teacher at St. John School in Westminster, where the Artusos are parishioners, gave birth.

Williams Syndrome, caused by missing genes, occurs in about 1 in 8,000 births. Among the missing genes, according to the National Library of Medicine, is elastin, a protein that allows blood vessels and other tissues in the body to grow.

“I wondered where it was going to take me when he (Darren) was a baby,” Joe said. “I was in my 20s. I was just overwhelmed with the diagnosis. You go through your whole life – high school and college – wondering what am I going to do for a career.

“I realize at 54 that my career was to be his father. This was a blessing in disguise. The career isn’t important. It’s being his father.”

Joe started his job with the athletic training staff at Loyola in 1986 – on Darren’s first birthday. Gretchen stayed home when Darren was young and spent significant hours raising him and his three siblings.

Over the years, Darren became a regular on the sidelines at Loyola sporting events, following his father. He was a toddler when Toomey was a goalkeeper for the Greyhounds, from 1987 to 1990.

When Toomey returned in 1993 as an assistant coach, Darren was beloved by the lacrosse team.

“I always remember Darren being there, being a fan. To me, it’s similar to what my children are now – big fans wanting to know every player,” Toomey said.

Darren, highly functioning and a strong student due to his mother’s guidance, graduated from Westminster High School. Darren then started working for Loyola in the equipment and training rooms of Reitz Arena on campus.

“I help out with towels, get their mail,” Darren said. “I do whatever they ask me to do.”

Darren never could have imagined working for Loyola like his father. He said he wanted to work at a video game and movie store.

His years on the sidelines at Loyola have made him, according to Joe, the “go-to-person when we go to team meals. He’ll sit with the coaching staff. If they need to know a stat or something’s that’s happened. … He’s in the locker room every day. He travels on all the buses and all the flights.”

Loyola coaches, students and staff, Darren says, are his “family away from home. They come and go, but they always come back and visit.”

When Toomey became head coach in 2006, he bonded with Darren. Darren considers Toomey like an uncle, while Toomey, a father of three daughters, said Darren is like a son.

During this year’s postseason push, Darren addressed the team after games. After the championship, he was near tears talking to them.

“I love these guys like my family,” he told a crowd gathered at a rally in Foxborough.

He’s not just beloved at Loyola. Johns Hopkins’ University coach Dave Pietramala is among those who often call Darren after games to ask how he’s doing.

Joe, ever the proud father, looked at his son – who once had an ominous diagnosis – inspiring national champions and hundreds more.

“That’s the whole reason I’m here – so that he has this opportunity,” Joe said. “There’s a reason this all happened and it wasn’t for me.”

Toomey, remembering one Darren pep talk during the postseason, raised his arms to show hair rising.

“That still brings chills to me because he’s such a special person,” Toomey said. “That’s what Loyola is about and, in my opinion, what makes this place special. It develops the whole person.