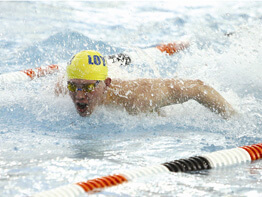 It was just another day at the office for the Loyola Blakefield swim team, or was it?


After finishing the regular season with a record of 5-0, the defending champion, Loyola Dons traveled to McDonogh School, Owings Mills, Feb. 10 for the Maryland Interscholastic Athletic Association’s Swimming Championships.


Though the Dons handily defeated the McDonogh Eagles during the regular season by a score of 107-63, the Eagles and Dons were sharing the lead, back and forth throughout the day and by 8 p.m. it was down to the final event, the 400-yard freestyle relay and the crowd was fired up.


The swimmers took their marks as the gun sounded; six lanes of swimmers splashed into action and the cheering began. With a time of 3:12.45, the blazing Dons took first-place which sealed a seven-point, 320-313, victory over McDonogh and 14 years of title honors for head coach Keith Schertle and his amazing Loyola Dons.


It was a total team effort from top to bottom for the Dons who really only posted one first place finish throughout the championship competition and that was the final event of the evening. The first place finish certainly helped but it was the multiple point-producing placements that made all the difference for Loyola.


Also defending their title was St. Mary’s, Annapolis, who compete in the MIAA B Conference. Undefeated again this year at 6-0, the 19 swimmers for the Saints came into the championships and blew their competition away with a total score of 328 to second-place finisher Severn School’s 229 points.


The St. Mary’s boys’ swimming program is just three years old and will remain strong into the 2008 season. Led by a core of juniors, Danny Quinn, Frank Vita and Tommy Shea, the Saints’ head coach, Nancy O’Leary is proud of her team’s accomplishments, taking nine events out of 11 in the championships. The Saints’ team captains are seniors Matt Roberts and Dan Mellin. Stepping up big for the Saints this season has been freshman Sam Cunard.