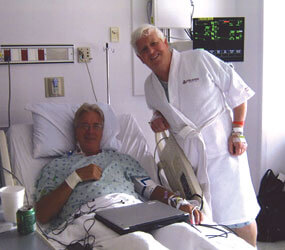 If Peter Lorenzi believed in omens, he stared one in the face May 11 at The Johns Hopkins Hospital as he read the admitting clerk’s nametag, “Destiny.” As Lorenzi faced a full day of medical tests to potentially donate a kidney to his best friend’s brother, he hadn’t yet realized that “destiny” was undeniably playing a part in his decision to save a life.

That step had played out earlier in the Loyola University office of Jesuit Father Hank Hilton, who expressed deep frustration to Lorenzi that the priest had been rejected as a donor candidate and would be unable to save the life of his brother, Peter, who was fighting polycystic kidney disease.

Lorenzi, a close friend and fellow Loyola professor, said “I’ll do it.”

Father Hilton said that Lorenzi made that pronouncement “with complete and utter nonchalance.”

“It seemed right,” said Lorenzi, “a natural extension of my friendship with Hank. I had a gift given to me and I was able to give it to his brother.”

In this Peter-to-Peter kidney swap between Lorenzi, a parishioner of the Catholic Community of St. Francis Xavier in Hunt Valley and Peter Hilton, a 57-year-old resident of New Jersey, John 15:13 springs to life: “Greater love has no one than this, that one lay down his life for his friends.”

“This guy saved my brother’s life,” Father Hilton announced two weeks post-surgery, with a fond nod to Lorenzi during a liturgy at St. Francis Xavier, where Hilton has served Mass regularly since 1997. “This adventure has opened my eyes to a whole new universe of ways in which God pours love into our world. If everyone had in their lives what I have in Peter (Lorenzi), the world would instantly become more like the New Jerusalem God has in mind.”

The 15-year friendship between Lorenzi and Father Hilton is based on similar career backgrounds and statuses as middle siblings in large Catholic families. They met while Father Hilton had interviewed at Loyola, where the two teach, publish business articles jointly and frequently pow-wow, plotting to help students in peril.

The two Peters – who had met only once – went under the scalpel June 27 at Hopkins, when Lorenzi made good on his word and altruistically surrendered a fit kidney to Hilton, a former triathlete left with two useless ones.

Treatment options had included the less preferable dialysis or the preferred transplant. Although a sibling’s kidney is usually the best substitute, other Hiltons were unable to donate.

“Then came Peter (Lorenzi),” said Peter Hilton, owner of a construction company, “who seemed to be challenged by the opportunity, the test and then the act. … Amazing. … Everything they tested him for – six months worth – he kept passing. It was a commitment on many levels. Why would he want to do this?”

“Peter (Lorenzi) never wavered in his decision,” said his wife, Dena. “There have been a lot of moments – big and small – that have revealed the Divine.”

The transplant was a success. Hilton’s recovery includes a strict regimen of 30 pills a day and delicate care to the line of steel staples running from pubic bone to left side. He must avoid shopping malls, babies, the sun, cat litter boxes – and anywhere that would leave him susceptible to germs.

“But the doc mentioned that it’s a great fit,” Hilton said of his new kidney, one of 250 annually that the Hopkins transplant team performs.

“I have no idea how to thank someone who saved my life,” he said. “I can’t buy him something … All I can do is honor his request to ‘Live a good life and be a good man’ “ – words from a graveyard scene in “Saving Private Ryan” that Lorenzi had previously shared with Hilton.

Along with the handshakes and back pats, Lorenzi said he’s not keen on hearing the word “hero”; he prefers “model.”

“I tell people that Peter Hilton was the beneficiary of his brother’s love,” Lorenzi said. “(Father) Hank facilitated a modern-day medical miracle; without him, none of this would have happened. I just happened to be blessed with a healthy kidney and an attitude I learned from my parents – ‘Leave the world a better place than you found it.’ ”

“His ability to connect the dots between his faith and his actions,” Father Hilton said of Lorenzi, “is a marvelous model for anyone.”