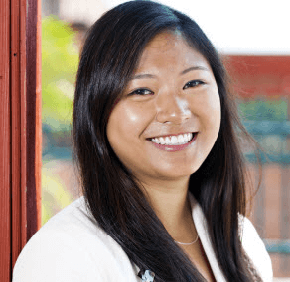 TIMONIUM – Stephanie Tsang’s adult life is just beginning, but she is passionately learning about end-of-life care.

The Loyola University Maryland junior, who was trained and certified as a hospice volunteer in her native Massachusetts, began volunteering at Stella Maris in January. Soon after, she was inspired with the idea for a research project at the Timonium hospice.

Tsang is one of three students and two faculty members from the Baltimore university who are this year’s recipients of the institution’s Kolvenbach Summer Research Grant, which encourages research that strengthens the work of Baltimore nonprofit organizations and agencies, according to Loyola’s website. Student recipients receive a $3,500 stipend for summer living expenses.

For her project, Tsang is interviewing 20 Stella Maris hospice staff and 20 family members of patients about the role religion and spirituality have in end-of-life care and why families choose hospice rather than a hospital or nursing home.

She has written an interim report on her findings and will write a full report at the end of the summer. In addition, she will design a poster or give a presentation on her research this fall.

“Primary caregivers need to educate patients and families about hospice as a viable option,” Tsang said, sharing some of the staff’s feedback thus far. “There’s a lot of stigma or mystery behind the word hospice.”

Regardless of whether a patient or their family is religious or spiritual, Tsang said patient’s family members have said they value Stella Maris’ pastoral care department as a resource.

“I believe we all have spiritual needs,” Tsang said, “and this is just an incredible place because they can provide that for a person. A patient needs religion as much as they need medication.”

Tsang, 20, is a theology major, biology minor and pre-med. She plans to pursue medical school and is considering a specialty in geriatrics.

She is volunteering at Stella Maris five days a week this summer. The number of patients Tsang visits depends on the daily census.

“We are trying to meet the patients where they are and walk with them,” Tsang said. “That’s really what I do as a volunteer.”

Received into the Catholic Church in April, Tsang said volunteering at Stella Maris has deepened her faith.

“There’s a lot of God in this place,” Tsang said. “I know it because I see it. I’ve learned about the grace of God. It’s about being open to letting the love flow through you.”

Bernadette Roche, an associate professor of biology at Loyola and Tsang’s project adviser, said the project is “incredibly unusual.”

“At 20, that is really remarkable, to be immersing herself into that world,” Roche said. “Why I supported this research and even encouraged her to look into it is because when you have a passion about something, that’s where you can really learn the skills and technique to do this research.”

“There’s a deep presence that she brings to people that usually comes with an older person,” Yannarell said. “I thought it (the project) was a wonderful idea. I thought it showed great initiative on her part.”