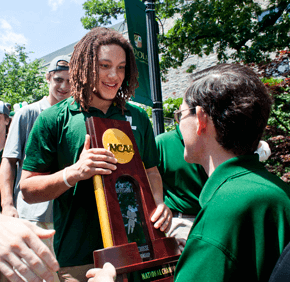 The men’s lacrosse team from Loyola University in Maryland completed an historic season May 28 at Gillette Stadium in Foxboro, Mass., where the Greyhounds defeated the University of Maryland College Park, 9-3, in the NCAA Division I championship game.

The Greyhounds of coach Charley Toomey not only became the program with the smallest undergraduate enrollment to win the title, they also became the first from a Catholic college to claim the prize.

The Blue Jays were the only team to beat Loyola this season, as the Greyhounds finished 18-1.

Down 3-2 to Maryland in the second quarter, top-seeded Loyola didn’t allow another goal in front of a crowd of 30,816 and a national television audience.

Eric Lusby scored four goals, giving him a record 17 for the tournament, and Chris Layne had three for the Greyhounds, who were making their second appearance in the final. Toomey was their goalie in 1990, when they lost to Syracuse in the championship game.

The Loyola captains include J.P. Dalton, a senior midfielder out of St. Mary’s High in Annapolis. Patrick Fanshaw, a junior attackman out of Calvert Hall College High School, is a reserve.

The only previous Loyola men’s team to win an NCAA championship was soccer, which took the Division II title in 1976.