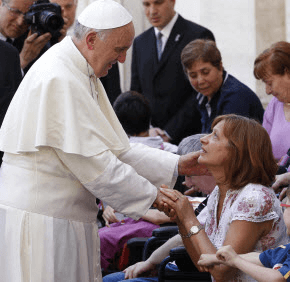 By Paul McMullen
pmcmullen@CatholicReview.org
Twitter@ReviewMcMullen
It’s fitting that Loyola University Maryland in Baltimore’s Reitz Arena will be the site of the “Francis Factor,” a March 18 symposium addressing the first year of the papacy of Pope Francis, the first Jesuit pope.
The college was founded in 1852 by the Society of Jesus, and Jesuit Father Brian F. Linnane, its president, is a most interested observer in Pope Francis, the most prominent member of the society. Father Linnane shared his thoughts on the pope with the Catholic Review last month.
Edited from a recorded interview.
Q. What is the legacy of Pope Francis?
A. He’s re-positioned the church in a fundamental way. Jesuit historian John O’Malley gave a day of recollection for the community here. He’s an astute observer of church history, and at lunch, he said, “I never would have imagined (Pope) Benedict would have resigned, and if he did, it would have been a bad idea, because the new pope would not be able to do anything fundamentally different while Benedict is alive. Boy, was I wrong.”
Consider his simplicity. Cardinal (Seán) O’Malley and Archbishop (William E.) Lori are coming to dinner at my house before this talk. The caterers are beside themselves, and want to go over the top. No, no, no. What would Pope Francis think? That shift, being a church of the poor and taking the poor seriously, strikes at the heart and resonates so deeply in the Catholic imagination.
Q. How has his papacy affected U.S. Jesuits?
A. Darryl (J. Coward, his assistant) once asked if ever thought I might be pope someday, and I told him no, and that if I had wanted to be pope, I joined the wrong order. He asked, “What do you mean?” Some people find us (Jesuits) arrogant, aloof. Some other people find us liberal. I told Darryl that there never has been a Jesuit pope and there never will be.
It (Francis’ papacy) reinforces the Ignatian charism in us. You see how it works in the church and us, the radical thing that is going on. When he was on the plane (last July) and asked about homosexuality, and said, “Who am I to judge?” I thought, “You are the pope.” We’re used to having papal authority tell us what is right and what is wrong, what you should do. In that same flight, he said it was plain that the church’s theology on women was inadequate. That never happens. The Vatican is the source of all adequacy theologically. For him to admit that … it’s the thing that got Ignatius (the founder of the Jesuits) in trouble. (Ignatius said) “God might be doing something new. It’s our task to discern it, to be open to what God is doing, find God in all things.” We see for the first time in the history of the society, our way impacting the universal church.
Q. Is there a moment in his papacy that most affected you?
A. That interview on the plane – it’s not too strong to say I was shocked by that. Then the interview in America (magazine, last September). My provincial told me, “Read it today, because you’re going to be getting a lot of questions about this.” I did that night, and said, “Wow, this is incredible.”
When kids ask me how I became a Jesuit, I have to explain that I was formed in a culture that is gone. As I went through elementary school, I watched the openness of the Second Vatican Council. Going into the convent to help the sisters get (it) ready so that the local Baptists could come in and see it, that was unthinkable a few years before. The changes in the (sisters’) habits, going to Boston College in the 1970s, there was a sense that things were happening in the church.
Then, that sort of plateaued. Some would disagree, our retrenchment in some ways, (to a) shift in focus around the “culture wars.” I didn’t think I would see in my lifetime, as I read that interview, a pope pulling us away from that. (To paraphrase, Francis said), “Those things aren’t unimportant, but they aren’t what is at the heart of the Gospel. We need to start with what’s at the heart of the Gospel.” I got teary-eyed reading that.
Q. How is the church affected by the attention Pope Francis has gotten from non-Catholics?
A. I became a theologian because of the ways in which the teaching of Jesus, the teaching of the church, makes sense. That teaching itself is conducive of a happy life. For example, parents know that raising children is very demanding, in terms of your time, resources, the worries, yet it’s one of the key experiences in life, one that people would never give up. Having children conforms with, is a natural example of, this Christian notion of going to the other, of loving the other. That’s where we find deep meaning, deep reward. In the Christian tradition, in the words of Jesus, most particularly, that means caring for the poor and the marginalized.
There are terrible problems in the world. People say, “I’m embarrassed that I didn’t know enough about the refugee situation in Africa.” Well, the pope has shaken that up. In reacting to those who are most in need, there is a way in which he’s touching something very human, and calling all persons to a deeper humanity, which is another way of saying, Godliness.
Also see:
Archbishop Lori joins lawsuit against HHS mandate
Longtime Social Ministry Convocation attendees draw inspiration from Pope Francis
Top 10 things most people don’t know about Pope Francis
PrevNext