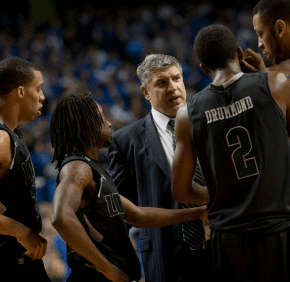 Justin Drummond admits the idea of taking an overnight trip into the mountains of Western Maryland to bond exclusively with his Loyola University men’s basketball teammates gave him pause.

Drummond, a sophomore guard for the Greyhounds, has hung out with other players throughout his youth. But the thought of being cooped up with an entire roster of them on a spiritual retreat offered some uncomfortable possibilities. What would the guys talk about? How would they spend two days interacting with each other in such confines? Would it prove to be more useful or awkward?

Several months into a historically good season at Loyola, Drummond, teammate Robert Olson and Loyola head coach Jimmy Patsos have reached the same conclusion. They say the time spent together last October at the Loyola University Retreat Center in Flintstone has brought the Greyhounds closer together in ways that in part reflect how well Loyola has performed.

“They are much more religious, more in touch with their souls, than people would think,” said Patsos, who calls the eighth squad he has coached at Loyola his “most faith-based” team.

“The guys don’t express it outwardly, but they are good Christian people with good character, very spiritual,” he added. “Being involved with campus ministry has helped us. I know that retreat has helped our team.”

Since joining the ranks of NCAA’s Division I 30 years ago, no Loyola team had ever won 20 games before these Greyhounds. Loyola has serious designs on earning its second-ever Division I tournament bid – and first in 18 years – by winning the Metro Atlantic Athletic Conference tournament (March 1-5) in Springfield, Mass.

The players recognize that talent and tenacity have put them in this position. They also point to a sense of unity among the team’s 14 players that has deepened this year.

They point to the two visits they have made in years past to help feed the homeless at Beans and Bread in Fells Point. And they point especially to those two days in early October in Flintstone, where players – without any coaches present – took turns sharing personal details about their lives, talked about God’s presence in their lives, went on a nighttime hike and did everything in groups.

“At first, when we heard about (going on a retreat), we weren’t too excited about it, but we decided to give it a try,” Drummond said. “It really helped us to connect with each other. We got to know more about each other’s problems, and we got closer as a team. We really are one unit, a tight unit. I think (the retreat) is paying dividends on the basketball court.”

“I wasn’t expecting (the retreat) to be as rewarding as it was,” said Olson, a junior guard and the team’s third-leading scorer. “Some guys on the team are Catholic, some not. Some are more religious than others. But we all believe in the same God and the same Jesus. It was just good to open up to each other about our lives and figure out more about who we are.”

Throughout the season, the Greyhounds have been a model of hustle, unselfishness, balance and consistency. Four players score an average of least 11 points per game. And Loyola recently went through a stretch where, for the first time at the Division I level, its defense held six straight opponents to fewer than 60 points.

Jesuit Father Jack Dennis, who has directed Loyola’s campus ministry for five years and organized the basketball retreat, would not attempt to quantify the event’s effect on the Greyhounds this season. But he is certain the team entered the year in a better spiritual place after the retreat.

“Some of the guys gave reflective talks to the group,” Father Dennis said. “No rah-rah speeches. We worked on an art project. We prayed aloud or silently for someone. There is structure, but I let the retreat unfold.”

“It never ceases to amaze me how little players really know about each other’s personal lives – upbringing, family problems, loss of parents,” he added. “Great trust is built at times like that. God and the Holy Spirit clearly were with us on that retreat. It was one of the most spiritual retreats I’ve been on.”