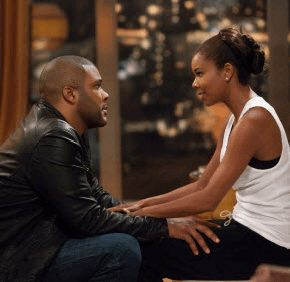 NEW YORK (CNS) — Less heavy-handed than the eponymous writer and director’s other morality plays, but considerably slower in pace, “Tyler Perry’s Good Deeds” (Lionsgate) focuses on a single relationship, and carries a steady reminder that the wealthy and powerful have to work much harder than the less privileged to approach the kingdom of Heaven.

Perry plays Wesley Deeds, a San Francisco tycoon who runs the computer software corporation founded by his father. He’s saddled with an alcoholic, promiscuous brother (Brian White) who’s as impulsive as Wesley is controlled, a glamorous fiancee (Gabrielle Union) who often takes advantage of Wesley’s predictability to enjoy nights on the town by herself, and a domineering mother (Phylicia Rashad).

As in all of Perry films, the theme is laid out early and broadly and invites an obvious answer: “Am I living my own life, or the life I’ve been told to live?” Deeds asks in a voiceover as the story opens.

Into this painfully ordered existence comes the untrammeled mess that is Lindsey (Thandie Newton), an Iraq War widow with a 6-year-old daughter, Ariel (Jordenn Thompson). Lindsey, who works the night shift cleaning Deeds’ suite of offices, is newly homeless from being evicted. Deeds finds her blunt approach to life startling, and — this being a romance movie of sorts — renewing.

Keeping things real is as fundamental to this tale as predictability. The big problem here is that when Perry takes a departure from his over-the-top Madea character, his acting style can kindly be described as somnambulant, and the message he’s trying to get across dims in the ensuing fog, despite energetic performances from his supporting cast.

Mature adolescents along with grown-ups, though, should have no problems with the material — assuming that they’re devoted Perry fans.

The film contains an implied premarital relationship as well as fleeting crass language and sexual banter. The Catholic News Service classification is A-III — adults. The Motion Picture Association of America rating is PG-13 — parents strongly cautioned. Some material may be inappropriate for children under 13.