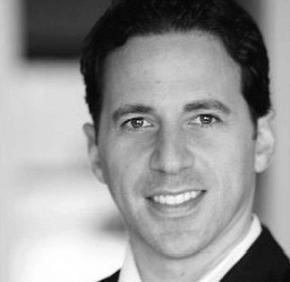 By Matt Palmer
mpalmer@CatholicReview.org
As managing partner of New York-based Drive Action Digital, a Web development company, and chief managing officer of social media innovator, The Athletes Network, Chris Dessi has precious little time.  But, the 1997 Loyola University Maryland graduate is also a husband, father and author of a book that reached No. 1 on Amazon’s list of Hot New Releases in January.
“Your World is Exploding: How Social Media is Changing Everything – and How you Need to Change with it” is a clarion call for businesses and individuals to embrace the Web’s possibilities for growth. The psychology major at Loyola became business driven during his graduate studies.
A few years ago, he was known for his campaign called “Facebook should hire me,” which garnered national attention from news outlets such as Fortune Magazine. While he didn’t get a job with the social media leader, he did gain the confidence to create and foster his own business.
He appears regularly on television to talk about social media, but he balks at being called an expert. In fact, he says social media is so evolving that being an expert is impossible.
He returned to Loyola Feb. 9 to implore students to embrace the world of social media’s possibilities and find and craft their voice online.
Afterward, he sat down for a question and answer session. The full interview is in an audio below, above a video of his Loyola presentation.
Q: How much of your psychology background is used in understanding your audiences?
A: It’s humanity, right? It’s humanity. It’s spirituality. It’s connecting with people. It’s being human. I suppose you could say I apply my psychology degree, but personally I’m drawn to psychology because I’m a heart-on-the-sleeve kind of guy to begin with. I never would have fit in on Wall Street. I had roommates who worked on Wall Street and made a lot of money. That just wasn’t the world to me. I get crazed. I get passionate. That just doesn’t fit other types of worlds. It works really well for social media because I can engage with people.  When I was a director of sales … I started to blog because I wanted to be heard. I knew I was smart enough and I wanted to go speak at conferences because I thought it was cool, because it was something that would get me out of bed in the morning and get my juices flowing. I love this stuff.
Q: When somebody says ‘I can’t do it,’ what do you say?
A: The only time I accept that is if they’re managing it for business and the business isn’t appropriate. There’s a certain level that everyone should be involved. When business owners say, ‘I don’t have time for social media,” my response is always, ‘Do you have time to care about your business?’ It’s a complete B.S. copout. There’s no such thing as social media. It’s all media. It’s literally life … because of mobile devices, the way we engage, the amount of time people spend on Facebook, the amount of time people spend on the Internet. It’s our world.
Q: When should college students make the turn from, this is something for fun to everything’s about building the future?
A: It’s a tough one because I didn’t live through it. There’s an awareness for college students that needs to happen. They’re being judged at all times. I’d like to say junior year, but there’s also just awareness. I know you want to post a picture, but just breathe.  Think about it for a second. It’s tough. They’re college kids. It’s a different kind of beast, but I think all college and high school kids need to be aware of it. There are high school kids losing scholarships that are losing scholarships because they’re being seen with beers in their hands on Facebook. The world has changed and we need to catch up with it. They’re college kids and it’s fun.
Q: Facebook is no longer the party where the parents aren’t allowed.
A: Everybody’s there. All the brands are there. Brand managers are there. CEOs are there. It’s just the way it goes. It’s time to grow up. Put on your big boy pants. That stinks and that’s tough.
Q: Is there anything at Loyola that prepared you for this?
A: I think Loyola gave me so much, I don’t know where to begin, frankly. My experience here was always all good. The Jesuit education is phenomenal, Loyola as an institution is phenomenal. I often encounter Ivy League people. You hit a certain level and you get Ivy League guys. I’ll be frank in saying I have a little chip on my shoulder. Maybe I work a little harder.
Q: For people who use Facebook to grow their business, but no one is responding, what should they do?
A: Sometimes, it’s just asking a question, making it a little more fun, making it a little less business like. It’s a tough thing for businesses to make things less business like. When a brand finally lets go, that their brand message isn’t what they think it is, but what the consumer says it is, they’ll be fine in social media. To engage appropriately in social media means to understand that it’s us connecting via our unconscious. When I post something that really ‘pings’ something in you, we’re connecting on a subconscious level. When it works and when it resonates … it’s almost a spiritual thing.
For an audio conversation with Chris Dessi, listen here:
For a video of his talk, watch below:
PrevNext