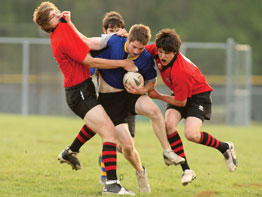 The Dons were 3-1 in conference play and defeated Archbishop Spalding High School by a score of 17-10 in semifinal action at the Severn school May 1.

The Cavaliers had handily defeated Loyola 24-7 in their regular season match on April 18, but the Dons came roaring back in post-season play to advance to this championship round.

Loyola’s rugby team came on line in the spring of 2001 with as many as 80 athletes involved in the program, allowing for three teams.

In 2008, Loyola is carrying 45 players and competing on both the varsity and junior varsity levels.

Head Coach Bob Schlichtig has been around rugby since his days at the University of Scranton in Pennsylvania, and he competed at the club level after college.

Coach Schlichtig teaches religious studies and enjoys teaching in the classroom and on the rugby pitch.

Schlichtig said that his backline is very solid this season, led by junior John Neskow and sophomore Vince Snarsky. Snarsky, a three-sport athlete, is strong to the ball while Neskow’s speed is paying dividends down field for the score.

The offensive line is anchored by senior Jack Geary, whose height has been a true weapon for the Dons. Geary is successful at controlling the scrum and the ball, always trying to get the ball down-line to forward Max Connors.