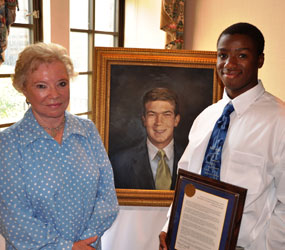 Dwayne Thomas’ life is a story of promise fulfilled, with the Loyola Blakefield senior using the Towson school’s motto, “Men for Others,” as a guiding principle.

“I want to help people to the fullest extent possible,” Thomas said.

The East Baltimore native is a scholar in the Boys Hope Girls Hope program, which aims to help at-risk youths attend college.

The second of five children, Thomas moved into the Boys Hope home as a sixth-grader in 2004. His college goal is within reaching distance, as he has applied to Loyola University Maryland, New York University, the College of the Holy Cross, Gettysburg College and the University of Notre Dame in Indiana, among others.

Thomas’ list of accomplishments at Loyola Blakefield – and in life – is long and varied. He’s captain of the JV ice hockey team, has a 3.2 grade point average and is a member of a school committee that develops integrity policy. He’s also active in theater productions with Loyola and Notre Dame Preparatory School.

“I never thought I would be as successful as I’ve been,” Thomas said.

Earlier this year, Thomas and his fellow Boys Hope scholars contacted the makers of ABC television’s “Extreme Makeover: Home Edition” in an effort to have a house built for the Girls Hope scholars, who had long desired a home of their own.

Thomas remembered stars and producers of the show saying, “As soon as we saw your guys’ names and what you were doing, we automatically knew it had to be you.”

The selfless act earned the Boys Hope scholars offers of free tuition from Loyola University Maryland and the President’s Medal from the College of Notre Dame of Maryland.

“Helping someone else have a better life is just an awesome feeling,” Thomas said.

Thomas, 17, has attended Catholic schools throughout his life, including Ss. James and John and Baltimore’s St. Ignatius Loyola Academy. He volunteers at his former schools because of their lingering impact on him

“The teachers there love you so much,” Thomas said.

He is inspired in his aspirations by St. Ignatius Loyola, who founded the Jesuits.

“He’s a saint because he did something selfless and that’s what I keep in mind,” said Thomas, who wanted to be a Loyola Blakefield student when he was 11.

“I thought I embodied being a man for others,” he said

Thomas dreams of being a Spanish-speaking doctor who can help immigrants communicate their medical troubles. In the summer of 2010, he participated in an internship at the Institute for Nanobiotechnology at the Johns Hopkins University’s Whiting School of Engineering.

Thomas was recruited to play ice hockey during his freshman year. He knew black participation in the sport is historically low, but took a chance.

“It’s invigorating to go outside your comfort zone,” he said. “At first I didn’t think I would like it. Doing hockey has made me a better person. I love hockey.”

Thomas says Boys Hope has provided him much-needed structure. He reaches out to new scholars in a big brother capacity.

“I feel like I’ve matured and changed a lot,” Thomas said. “I’ve had mentors who helped me and showed me the ropes to become a role model myself.”

In September, Thomas received Loyola Blakefield’s cherished Daniel W. McNeal Scholarship Award, named for a 1990 graduate who died during the 2001 attacks in New York on the World Trade Center.

McNeal had earned the Loyola Alumni Medal. The scholarship named for him is given to a student who is committed to academic excellence and community involvement.

“He was a selfless person who would do anything for anyone,” Thomas said of McNeal. “That’s what I’m all about.”