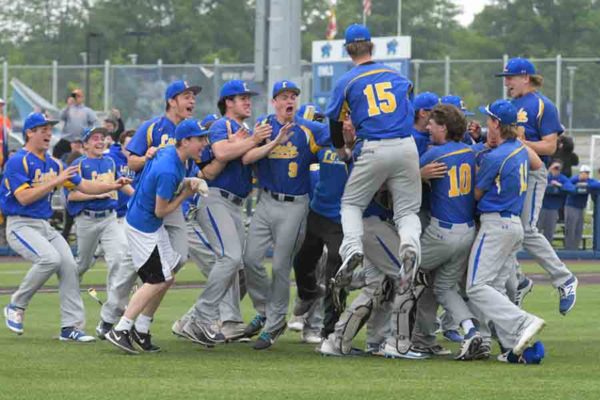 CHURCHVILLE – Loyola Blakefield scored seven runs in the sixth inning to cap a baseball comeback that was 71 years in the making.

The Dons rallied to beat Calvert Hall, 8-3, in the championship game of the Maryland Interscholastic Athletic Association A Conference double-elimination tournament May 22 at Harford Community College.

It was the first baseball title won by the school since 1946, when it was known as Loyola High, Alaska and Hawaii were U.S. territories, Harry Truman was president and the Dons’ roster, according to Varsity Sports Network, included young Tommy D’Alesandro, who would go on to be mayor of Baltimore.

“I was minus 21,” first-year coach Mike Kelly joked, about the gap since 1946, “so that tells you everything you need to know. These guys bought into everything I was doing from day one and it’s been a love affair right from the gate. These guys – you can tell they love the coaching staff and they believe.”

Few outsiders shared in that faith, as Loyola Blakefield finished with a losing overall record (13-14). St. Mary’s High in Annapolis was the preseason No. 1, Archbishop Spalding in Severn had won the last three A Conference titles, and arch-rival Calvert Hall was top-ranked heading into the tournament.

The Dons upset their way through the early rounds of the tournament, but on May 21 the Cardinals routed them, 9-0, to set up the winner-take-all final game.

Calvert Hall took a 3-1 lead in the bottom of the first inning of the championship game, but then Loyola Blakefield exploded in the top of the sixth. Cardinals’ starter Andrew Rosso took a two-hitter into the frame, as a record 28th program looked in order for coach Lou Eckerl’s program, but then the game turned.

Will Glock worked the first five innings, and Matt Wyatt got out of a bases-loaded jam in the bottom of the sixth.

“We kept it close and we started gaining a little bit of confidence,” Kelly said. “We won some big games in the playoffs – once that momentum gets going – it’s an unbelievable feeling.”

According to Loyola Blakefield, its fans in attendance included Larry Smith, a member of the 1946 team that won in the old Maryland Scholastic Association.