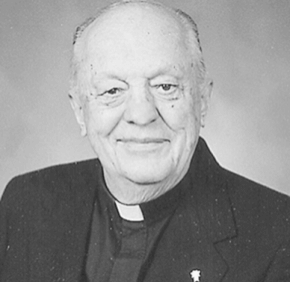 By George P. Matysek Jr.
gmatysek@CatholicReview.org
Twitter: @ReviewMatysek
Monsignor Chester J. Mieczkowski, a priest who devoted 45 years of his ministry to Holy Rosary in Fells Point, died Jan. 12 at age 95.
Born on Staten Island, Monsignor Mieczkowski trained for the priesthood at St. Charles College in Catonsville, St. Mary’s Seminary on Paca Street in Baltimore and St. Mary’s Seminary in Roland Park. Ordained on St. Patrick’s Day in 1945, the son of Polish immigrants sometimes joked that he was “Irish by ordination.”
Monsignor Mieczkowski served as associate pastor of Holy Rosary from 1945 to 1967. After a year as pastor of St. Mary in Pylesville, he returned to Holy Rosary in 1968 as pastor, serving in that capacity until his 1991 retirement.
During his long tenure at Holy Rosary, Monsignor Mieczkowski helped the community transition through the changes brought on by the Second Vatican Council.
He formed a parish council, established a religious education program for public school students, introduced contemporary music and promoted healing liturgies – all while also maintaining ethnic traditions at the Polish parish.
The pastor hosted a luncheon in 1976 at Holy Rosary for then-Cardinal Karol Wojtyla, who later became Pope John Paul II.
After his retirement, Monsignor Mieczkowski assisted at St. Augustine in Elkridge. Active in the Knights of Columbus, he was a former state chaplain for the Knights.
Dottie Neubauer, administrative assistant at St. Augustine, said Monsignor Mieczkowski essentially never retired. He celebrated Masses, heard confessions, visited the sick and “did whatever he could” to help. He also celebrated Mass twice a week at the now-closed Cardinal Gibbons School in Baltimore.
Neubauer noted that the priest taught himself Polish and heard confessions in Polish.
“Everyone liked him,” she said. “He made a lot of friends here.”
A viewing will be held 3-9 p.m. at Kaczorowski Funeral Home in Dundalk, with a wake service to be offered at 7:30 p.m. Archbishop William E. Lori will offer the 11 a.m. funeral Mass Jan. 15 at St. Augustine, preceded by a 9:30-10:45 a.m. viewing.
To read more obituary articles, click here.
Also see:
Little Sisters of the Poor stand firm against mandate
PrevNext