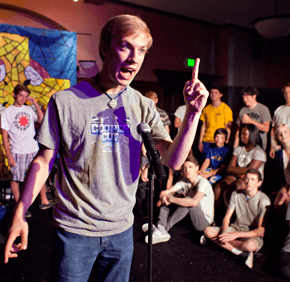 By Elizabeth Lowe
elowe@CatholicReview.org
TOWSON – The Loyola Blakefield Players are ready for the biggest performances of their lives.
The thespians will travel more than 3,000 miles to perform “Godspell” at the Edinburgh Festival Fringe, held Aug. 1-25. The gathering in Scotland is billed as the world’s largest arts festival.
“It’s a once-in-a-lifetime opportunity,” said Elliot Queale, a June graduate of the school in Towson and parishioner of Shrine of the Sacred Heart in Mount Washington. “Loyola Blakefield has the talent to do it.”
Queale, who will attend the University of Delaware, plays John the Baptist for the Players. They are directed by Christian Garretson, who is equally enthused about the prestige of the event known simply as “The Fringe.”
“We have this opportunity and we’re going to take it,” Garretson said. “People come to network and be seen there.”
William Watson, now a dean at the Community College of Baltimore County, nominated Loyola Blakefield for the festival. Garretson said it is one of 30 high schools from North America selected to attend by the American High School Theatre Festival.
Watch the Loyola Blakefield Players practice “Godspell” ahead of their international trip:
“I know Chris Garretson would take this very seriously and they would work very hard to mount the best possible production,” Watson wrote in an email to the Catholic Review. “I am very happy that they will be performing.”
It is the Players’ first participation in the annual event. Loyola’s 20-person ensemble, which includes females and musicians, is scheduled to perform “Godspell,” the Stephen Schwartz musical based on the Gospel of Matthew, Aug. 4, 6, 8 and 9.
During a nearly two-week trip, the group will sightsee and attend other productions at a festival which last year had 45,464 performances of 2,871 shows.
“We will see shows that would never be available to us,” Garretson said.
Like Queale, other cast members described the festival as “exciting” and “pretty cool.”
“It has always been my dream to go to Europe,” said Cyerah Zoeller, a parishioner of St. Ursula in Parkville who attended its parish school. “It hasn’t fully sunk in.”
A graduate of George Washington Carver Center for Arts and Technology in Towson, she will next head to West Virginia University.
“Doing a show like this keeps you in touch with it (your faith),” said Zoeller, 17. “It renewed my faith.”
Garretson, the director, said faith is central to the storyline.
“That’s what the play is about – people are meeting Jesus where they are,” he said.
See also:
Take me out to the ballgame: Oriole Park through the eyes of the team’s biggest fan
From youth ministry in Walkersville to South Bend administrator
US roster for World Lacrosse Championship includes local Catholic school products
PrevNext