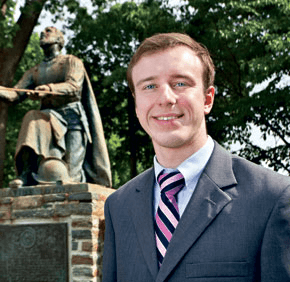 To help energize themselves, A.J. Unitas and his Loyola Blakefield teammates shout, sing and form a circle – extending their arms and chanting, “one, two, three, four” before quickly lifting their arms high the air.

Unitas and his teammates aren’t preparing for a lacrosse or baseball game. They are part of Loyola’s forensics team and perform this ritual before speech and debate competitions.

Seventeen of the school’s nearly 50 students on the team competed in the National Catholic Forensic League championships May 26 and May 27 in Baltimore. Loyola was a host site of the tournament May 26.

Loyola participates in the Baltimore Catholic Forensic League – a subsidiary of the NCFL – and students qualify for state and national competitions through that league, said Tom Durkin, a Loyola learning specialist and a forensic team coach. Students on the forensics team participate on either the school’s debate team or speech team, Durkin said.

Students on the forensics team are “light years ahead of their peers,” Durkin said, because of the skills students develop because of forensics.

“It puts them well beyond what their peers will be able to do when they go to college,” Durkin said.

Three of Loyola’s tournament competitors advanced to the elimination round May 27, said Charles Donovan, a science teacher and head coach of the forensics team at Loyola.

Sophomore Joe Ferlise was a finalist in oratorical declamation; junior Kurt Imhoff placed sixth in oral interpretation of literature; and senior Stephen Phillips was a semifinalist in student congress. These students will participate in the National Forensic League competition this June in Indianapolis, Ind.

About 70 percent of students were eliminated after the May 26 round, Durkin said. Loyola’s forensics team won the NCFL championship in 2005 and 2010.

A.J. Unitas, who did not advance to the May 27 elimination round, said the experience “prepares you for the real world.”

“You’re going to have to get up and give your own speeches,” said Unitas, 18, a Loyola senior who spends at least six hours each week practicing his speech. “Forensics is that beacon that allows you to get up in front of someone and say what’s on your mind or be a character.”

At the beginning of the 2011-2012 school year, Unitas wrote a 10-minute speech about overcoming shortcomings and embracing flaws, which he has been tweaking since. He presents the speech from memory.

“Performance is an outlet to share what you have, what God’s given you,” Unitas said.

Unitas, who will attend Harvard University in Cambridge, Mass. this fall, said “forensics is something that colleges are really interested in.”