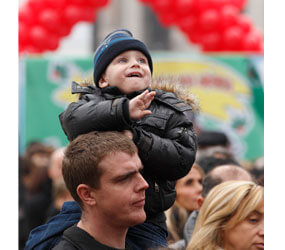 VATICAN CITY – Changing the world for the better does not come from leaders making grandiose promises or calling for a violent revolution, Pope Benedict XVI said: It comes from the humble individuals who silently carry God’s light and love to everyone around them.

The pope made his remarks during a visit Dec. 12 to a Rome parish that serves Italians from central and southern Italy as well as East European nations and other countries.

In his homily, the pope commented on the day’s readings for the third Sunday of Advent, in which John the Baptist sends some messengers to ask Jesus, “Are you the one who is to come, or should we look for another?”

The last two or three centuries have seen many people asking Jesus the same question, wondering if he really is the one who will change the world, the pope said.

“Many prophets, ideologues, and dictators have come and said ‘It is not him. He did not change the world. It is us” who will do so through empires, dictatorships and totalitarian regimes, he said.

Such leaders did change the world, he said, but for the worse, and today “we know that nothing has come out of these great promises other than great emptiness and great destruction.”

Jesus responds to the question, “Are you the one” by pointing to his good deeds of healing and proclaiming the good news, the pope said.

The world will continue to see that “it is not the violent revolution of the world, not the great promises that change the world, but the silent light of truth, the goodness of God that is the sign of his presence and that gives us certainty that we are completely loved and that we are not forgotten, that we are not a product of chance, but have been willed from love,” he said.

The pope highlighted some of the men and women of the church who shone God’s light on others: St. Maximilian Kolbe who sacrificed his life to save the life of another; St. Damien de Veuster, who helped the oppressed and suffering; and Blessed Teresa of Calcutta.

The pope asked that people get closer to God so that they can be points of light for others.

Later that day, the pope recited the Angelus with pilgrims in St. Peter’s Square.

The square was filled with children and families who brought statues of the baby Jesus for the pope to bless before placing them in Nativity scenes at home and at school.

Before blessing the figurines, the pope said listening to and reading sacred Scripture can help bring stability and direction in a world “that makes us feel invisible and every certainty seems to collapse.”

The word of God is a compass that points the right way and is “an anchor to keep from going adrift,” he said.

The pope said the Advent season helps people cultivate greater patience and hope. Like the farmer who plants his seeds and patiently waits for the fruits to grow, the faithful need to have the farmer’s same balance of faith and reason, the pope said.

On the one hand, he said, people must understand the laws of nature and work in harmony with them and, on the other, have faith in God’s providence, because some things are only in his hands.