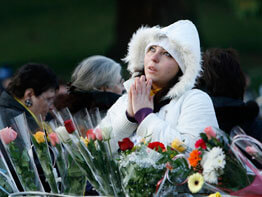 LOURDES, France – Mary did not seek devotion from St. Bernadette Soubirous and Catholics but instead sought devotion to Jesus and the Eucharist, said Bishop Jacques Perrier of Tarbes and Lourdes.

In the apparitions at the Massabielle grotto, Mary led St. Bernadette to Jesus and today intercedes for pilgrims and leads them to Jesus, the bishop said at an outdoor international Mass in Lourdes Feb. 11, the feast of Our Lady of Lourdes and the World Day of the Sick.

“The mission of Lourdes is to be a school of prayer, a place where it is easy, natural to pray,” said Bishop Perrier.

However, St. Bernadette finally received the sacrament between the 17th and 18th apparitions. The Lourdes jubilee year – which began Dec. 8, the feast of the Immaculate Conception of the Blessed Virgin Mary, and runs until this Dec. 8 – marks the 150th anniversary of the Marian apparitions to St. Bernadette.

Welcoming the estimated 50,000 pilgrims, Bishop Perrier said that no one is excluded at Lourdes.

All of the Jubilee Way is in preparation for the Eucharist, said Bishop Perrier, who, like the tens of thousands of pilgrims thronging the streets of Lourdes for the feast day, wore a souvenir medallion marking his participation in the Jubilee Way pilgrimage.

The bishop said that when Mary appeared to St. Bernadette Mary was smiling and laughing. Lourdes is a place of happiness and confidence, but also of penance and a difficult stage of conversion, he said.

Among the crowd at Mass was Anne Bisschop, 20, who was with a group of 200 youths from the international Community of the Cenacle. The community provides care for young men and women from around the world who are suffering from drug addictions, depression, eating disorders and “people who need a new experience,” said Bisschop, from Belgium, who voluntarily entered the community with a drug addiction five months ago.

Bisschop told Catholic News Service the community is “a school for life” that changes “our life with our religion.”

On the outskirts of the Mass grounds, Sinead Boyle of Louth, Ireland, stood with her father on the lines for the baths, the waters of Lourdes said to give strength and healing. She told CNS that she went to the baths the day before, but was willing to wait in line for at least the three hours until the baths opened to submerge in the chilly waters again.

Father Niall O’Leary of Holy Family Parish in Pasadena, Calif., was walking through the crowds of pilgrims leaving Mass and wishing “Happy feast day” to one another. The priest was carrying the Eucharist from the Mass to give to a 93-year-old man who was too sick to attend. Father O’Leary told CNS the man’s 19-year-old granddaughter brought him to Lourdes to participate in a 50-member pilgrimage from southern California.

Meanwhile, Pope Benedict XVI said in his Feb. 10 Angelus address at the Vatican that the message of Lourdes reminds the faithful to pray and do penance. The pope said he promised to pray for all sick people during his annual Lenten retreat, which began the evening of Feb. 10.