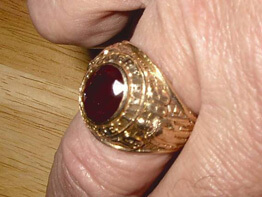 When Calvert Hall 1966 graduate John “Jay” H. Comi served in the Merchant Marine 1967-69 aboard a cruise ship, his heart sank along with his class ring when he realized he lost the gold piece in the surf of St. Thomas, U.S. Virgin Islands. As a junior, Mr. Comi had received the ring from Calvert Hall College High School, Towson.

Now 40 years later, it’s back on his finger. A phone call to the school from a woman in St. Thomas revealed that her father had found the ring in the late 1990s while surf fishing. It was set aside and forgotten, until recently discovered again when the woman located Calvert Hall on the Internet.

Mr. Comi, 58, said it had been so long (he was 19), he didn’t know what to think.
“I remember the incident of losing it quite well. I had a day off; some friends and I went to a beach, swam around in the surf for about a half-hour. As I walked off the beach, I noticed my hand felt lighter and my ring was gone. I turned around to look at the surf and realized I had absolutely no chance of finding it. I was quite upset. It was a beautiful ring.”

The pure gold ring has maintained its beauty after 40 years of rolling around in the surf. “You’d think that it would have been worn down to some degree,” said Mr. Comi, a native Baltimorean who resides in Raleigh, N.C., where he is coordinator of eucharistic ministers and lectors for his parish. He received the ring in the mail Feb. 17.

“There must be forces at work here I have no control of,” he said. In an e-mail to Calvert Hall, Mr. Comi wrote, “I’m wearing my ring! Can you believe it?”