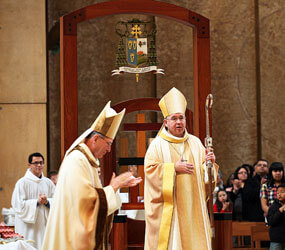 LOS ANGELES – More than 6,000 people assembled for two Masses Feb. 27 at the Cathedral of Our Lady of the Angels to observe a historic – and rare – transition of leadership in the Archdiocese of Los Angeles.

On the day Cardinal Roger M. Mahony celebrated his 75th birthday – the age at which bishops are canonically required to submit their resignations to the pope – Archbishop Jose H. Gomez was welcomed as the new leader of the church of Los Angeles.

Archbishop Gomez was named last spring by Pope Benedict XVI as coadjutor archbishop for Los Angeles. He had served five years as archbishop of San Antonio, and was previously an auxiliary bishop of Denver.

Cardinal Mahony, the first native Angeleno to serve as archbishop of Los Angeles, was installed in September 1985 to lead the nation’s most populous archdiocese, now numbering nearly 5 million Catholics. The cardinal was a priest of the Fresno Diocese when he was named a Fresno auxiliary bishop in 1975, then bishop of Stockton, Calif., in 1980.

The two Masses – one in English, one in Spanish – marked the first time that this ritual of transition has been celebrated in the eight-and-a-half-year-old cathedral. Since Los Angeles was created an archdiocese in 1936, only three other transitions of leadership have occurred, all at the former St. Vibiana’s Cathedral.

The ceremony featured an entrance procession that included Los Angeles’ auxiliary bishops. Archbishop Gomez’s coat of arms was carried by Sister Mary Elizabeth Galt, archdiocesan chancellor and a Sister of Charity of the Blessed Virgin Mary, and Monsignor Royale Vadakin, vicar general and moderator of the curia. During the Mass, the new coat of arms was installed on the cathedra, the bishop’s chair.

During the Mass, the new archbishop, welcomed enthusiastically by the assembly, led the singing of “Happy Birthday” to his predecessor, who likewise received a long ovation in appreciation of his quarter-century of leadership and service to the archdiocese.

In the March 4 issue of The Tidings, the Los Angeles archdiocesan newspaper, Archbishop Gomez wrote that he hopes “to spread this simple and beautiful truth of the Gospel: that each of us is born from the love of God, that each of us is a child of God who belongs to the family of God, the church.”

He said he has “five basic priorities” as he begins his work: education in the faith; promote vocations to the priesthood and the religious and consecrated life; “to help us to see the beauty of the church’s cultural diversity”; to “proclaim to our society that life is sacred from conception to natural death”; and to “defend and strengthen the natural institutions of marriage and the family based on the permanent and exclusive union of one man and one woman.”