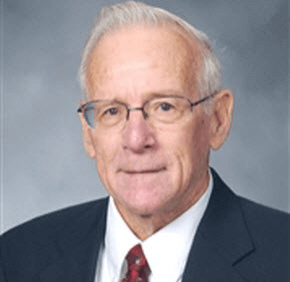 By Catholic Review Staff
J. George Kropp, a faculty member of Calvert Hall’s social studies department for 53 years and a well-known swimming coach, died Oct. 6.
Kropp, who retired from Calvert Hall in June, also coached football and water polo; coordinated the Towson school’s annual blood drives and moderated several clubs. He was also a former head coach of the Towson University women’s swimming team.
Bill Filan, a 1985 Calvert Hall graduate and career naval officer who resides in Fleming Island, Fla., said, “Mr. Kropp, ‘Coach,’ or as I would later learn to know, ‘George,’ provided an indelible mark upon me as both a student and as a member and captain for two years of Calvert Hall’s first water polo team. He was a task master who provided guidance and thoughtful insights to what were then mysteries of life. His steering and development of me as a young man has guided me through innumerable intellectual, moral and ethical dilemmas that I have faced as a career naval officer during multiple deployments over a 26 career. Thank you, George, for always being available and worthy of an example to follow.”
Kropp is survived by his wife and three children, eight grandchildren, a brother, sister and three sons-in-law.
Visitors will be received from 7-9 p.m. Oct. 10, 2-4 p.m. and 7-9 p.m. Oct. 11 at Ruck Funeral Home in Towson.
A funeral Mass will be offered at 10 a.m. Oct. 12 at Church of the Immaculate Conception in Towson and burial at Dulaney Valley Memorial Gardens in Timonium.
Donations can be made to Calvert Hall’s George Kropp Scholarship Fund. Visit calverthall.com.
To read more obituary articles, click here.
Also see:
Tom Clancy never flunked English at Loyola
PrevNext