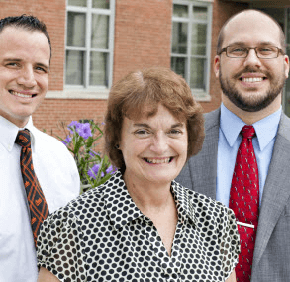 Jose, who was Long’s Spanish teacher at Archbishop Curley High School in Baltimore, assigned him to teach a Spanish grammar lesson to students in a lower-level course.

“It probably planted a small little seed I forgot to water for a couple of years,” Long said. “I’ve come to find out I’m a natural (teacher). It’s the best job I could ever imagine.”

Long, a 1998 Curley alumnus, is the religion department chairman and a religion teacher at his alma mater. He and classmate John D’Adamo, who taught at Curley from 2002 until spring 2012 and is now the assistant principal at Immaculate Conception School in Towson, appreciate Jose’s guidance.

“She teaches without you realizing it,” Long said. “That’s the hallmark of a great teacher. She’s loved by generations and generations of students.”

Jose has been teaching at Curley for 32 years.

“She is an institution here at Curley,” Long said.

D’Adamo and Long are among a handful of alumni who returned to their high school as faculty and staff members.

“We welcome them back and you’re just so proud of them,” Jose said. “John and Jamie were always two of my favorite students. We do have a good relationship with our students, alumni and faculty.”

In addition to her duties as foreign language department chairwoman and a Spanish teacher, Jose is the longtime yearbook adviser.

As students, D’Adamo and Long were on the yearbook staff.

“One of the things that was always critical to being on the yearbook staff was getting it done right,” D’Adamo said. “That rarely happened the first time.”

“Teaching was a lot like that, especially when you’re new to teaching, you’re not going to get it right the first time,” D’Adamo said. “Her (Jose’s) approach to guiding educators is the same way. You do the best you can; don’t expect it’s going to be perfect the first time.”

In college, before he declared his major, D’Adamo called Jose.

“She was so encouraging,” said D’Adamo, who earned a bachelor’s from Mount St. Mary’s University in Emmitsburg. “She said it (education) would be a very rewarding career, that it certainly wouldn’t be easy, but nothing great ever was. She told me I would do a great job.”

“She didn’t just teach me as a student, she taught me how to be a good teacher and she taught me about the leadership roles, something I carry with me now,” said D’Adamo, who added Jose has “a wealth of knowledge about Catholic education.”

“She’s always going to be available to just provide support and guidance on whatever issues you might be facing as a Catholic educator,” said D’Adamo, who has developed “a deep appreciation” for Jose and seasoned educators who have contributed to Catholic education.

“I feel empowered to try to continue that legacy,” D’Adamo said. “She’s just been a consistent resource and support for the next generation of educators.”

“I’ve been given the chance at Immaculate Conception to be in a leadership position and I feel that I’m continuing the legacy of educators like Cheryl Jose,” D’Adamo said.