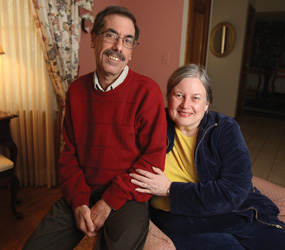 Orlando DeFelice was down to 92 pounds. His skin was the color of a banana. He couldn’t even take a few steps without becoming short of breath. The then-28-year-old parishioner of St. Joseph in Cockeysville needed a new heart and he needed it fast.

Ravaged by idiopathic cardiomyopathy, a serious disorder of unknown origin, his heart had been reduced to just 8 percent of its functioning capacity.

On Aug. 6, 1983, Mr. DeFelice’s prayers were answered when a helicopter flew the heart of a 16-year-old girl from Jacksonville, Fla., to The Johns Hopkins Hospital in Baltimore.

A team of doctors inserted the organ into Mr. DeFelice’s chest – replacing the young man’s damaged one with a healthy organ from a donor who had been killed in an accident.

Mr. DeFelice didn’t wake up for several days after the surgery. When he did, he instantly felt like a new man.

“I could breathe easily,” Mr. DeFelice remembered. “My skin was pink. I was able to get up and walk around. It was just incredible.”

Although doctors gave him only a 50 percent chance of surviving five years, Mr. DeFelice went on to become the longest-surviving heart transplant patient in Maryland.

Twenty six years after he received his new heart, Mr. DeFelice is ready to come back from the brink once again.

At a time when the Catholic Church is preparing for an Easter season focused on resurrection and new life, Mr. DeFelice, 53, is praying that someone will give him a kidney. He has suffered permanent damage to his kidneys – a result of the side effects of the medications he takes to prevent his transplanted heart from failing. His kidney function is down to 23 percent and he will soon need dialysis unless he finds a donor.

Because he has a rare blood type, his wait for a kidney could be close to four years and his chances of survival for a wait that long are not good.

“I think things will work out,” said Mr. DeFelice, a thin man whose black mustache is flecked with gray and whose face easily breaks into an optimistic smile.

“In the end, I think someone will come forward,” he said. “That’s just the way I am.”

A positive outlook on life and a deeply-rooted faith have sustained Mr. DeFelice in his battle for life. Both he and his wife, Pamela, pray every day and they have a network of family and friends who also keep them in their intentions. He especially finds comfort in attending Mass at St. Joseph.

Mr. DeFelice recalled how his pastor, Monsignor Paul G. Cook, recently gave a homily about Christ’s admonition to “be not afraid.”

“He stressed that we all be not afraid because the Lord will take care of us, and the Lord will give us what we need,” Mr. DeFelice said. “I found that to be very inspiring and it’s helped me a lot.”

Each day of his life has been a gift from God, Mr. DeFelice said. In appreciation, he has meticulously taken care of his heart – paying strict attention to his diet, exercising regularly, playing golf and staying active in his profession as an accountant.

Because of confidentiality agreements, Mr. DeFelice doesn’t know the name of the family that made the donation. He is ever mindful that their generosity allowed him to live far longer than anyone thought possible.

“That’s something that is so magnanimous and it’s such a huge event that it’s hard to conceptualize what it means,” he said. “I pray every week in church at Mass for the girl whose heart I have and for her family – that they have peace that they know they did a good thing.”

Mr. DeFelice is hoping there is another giving person out there with B positive or O blood who will be willing to donate a kidney. The removal of the donor’s organ would be done with three small incisions, and the medical expenses would be covered by Mr. DeFelice’s medical insurance.

Mr. DeFelice’s wife of 29 years noted that individuals can live active, healthy lives with just one kidney. She believes her husband is worthy of another chance at life.

“People treat him like a rock star because he gives so much inspiration to so many other people who are waiting for a transplant,” said Mrs. DeFelice. “They are inspired by him and his determination and courage.”

Mrs. DeFelice recalled receiving a card from her husband that was signed, “From the guy who can truly say he’s loved you with both his hearts.”

“He’s such a good man,” said Mrs. DeFelice, struggling to contain her emotion. “I want to find him a donor. I don’t want him to die.”