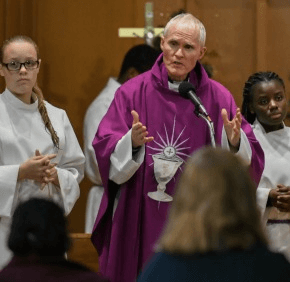 By Paul McMullen
pmcmullen@CatholicReview.org
FREDERICK – Bishop Mark E. Brennan turns 70 Feb. 6, 18 days after his episcopal ordination.
Blessed with good genes and a structured family environment, he applied discipline and scholarship to his academics and then the priesthood – to the benefit, now, of the Archdiocese of Baltimore.
“I don’t think I’m a complicated person,” he told the Review. “I don’t need a lot. Through my parents, I learned how to work hard. Thank God, I’ve had the health and stamina so far to do it.”

His sacramental home-away-from-home is St. John the Evangelist in Frederick. For 37 years, nearly as long as Bishop Brennan has been a priest, that’s been the parish of his only sibling, Paul, and his wife, Patricia. It’s the church where “Uncle Mark” baptized their three children, Jason, Lyn and John, and returned for first Communions and weddings – and now baptisms of four Brennan grandchildren.
“Mark could run and run all day,” said Paul Brennan, 67, who himself just recently stopped playing full-court basketball at the Frederick Y. “He doesn’t take pills. He doesn’t go to the doctor, unless he’s really run down.”
Over a rambling interview in his home, Paul Brennan described a typical story, of members of the Greatest Generation and their Baby Boomer children – albeit with an atypical big brother.

The brothers’ paternal roots are traced through Nova Scotia, the maternal ones Ohio. Their father, Edward, was in the U.S. Navy and served in the European theater during World War II. Their mother, Regina Lonsway, was a federal government worker when the two met at a dance in Washington, D.C.
The brothers were born in Boston, and raised in North Weymouth, Mass., near Quincy. In 1949, the first-born won the “100% Health Contest of Boston” sponsored by the Junior Chamber of Conference. His brother recalled summer days at Nantasket Beach, and a stern pastor of St. Jerome Parish upbraiding, from the altar, an aunt and cousins who were late arriving for Sunday Mass.

Edward and Regina Brennan are shown with their sons Mark, standing, and Paul, circa 1951. (Courtesy Brennan Family)

In December 1957, their father’s service took them to Bolling Air Force Base in Southeast Washington, D.C. As a civilian employee of the General Services Administration, Edward Brennan was a painter and foreman who worked on the White House and Executive Office Building.
The Brennans attended St. Thomas More Parish, just inside the District-Prince George’s County line. They watched the TV shows hosted by Bishop Fulton Sheen and revered President John F. Kennedy.
“My mother had a ‘Board of Education’ paddle,” Paul said. “She would say, ‘Wait until your father gets home.’ I can see it now.”
It didn’t get much use.

The boys ran off steam with the Boy Scouts, played sports and rooted for the Redskins and Senators. (Their summer traditions include taking in a major league baseball game, with Bishop Brennan keeping score.) Paul describes his brother practicing on the grand piano that “took up half the living room,” and tinkering on an American Flyer train set in the bedroom they shared.

A maternal aunt was a trailblazing educator in Washington County, Pa. Mark was an eager student, at public schools and then St. Anthony’s High School, near The Catholic University of America, where the leadership included Benedictine Sisters and the future bishop as  student council president.
“Mark was always reading,” Paul said. “Every night, he would be back in our bedroom doing homework, for two, three, four hours.
He talked of the priesthood, but his parents convinced him to attend Brown University in Providence, R.I. He supplemented his scholarship by working as a janitor, was vice president of the University Christian Movement and graduated cum laude.
After a year at Christ the King Seminary in Allegany, N.Y., Bishop Brennan shipped off, literally, to the Pontifical North American College (NAC) in Rome. The family heirlooms in Paul Brennan’s keep include a six-page, single-spaced letter the seminarian wrote in September 1970 to his family, thoughts on his trans-Atlantic sea voyage and first impressions of Rome.
At the NAC, he described “a few ‘loud’ paintings that I don’t care for.” At St. Peter’s Basilica, he noted the “tombs of Pius IX and John XXIII. Both are quite simple and unpretentious – unlike the magnificent, worldly tombs of some of the Renaissance popes.”
A preference for the unpretentious over the extravagant, it seems, was already in place.
Read more about Bishop Brennan and Bishop Adam J. Parker here, and read Paul McMullen’s blog about his family’s connection to the Brennan family here.
PrevNext