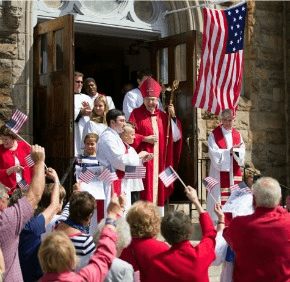 By Paul McMullen
pmcmullen@CatholicReview.org
Twitter: @ReviewMcMullen
“Lift High the Cross” was the closing hymn, but 11 a.m. Mass at Our Lady of Good Counsel in Locust Point Sept. 14 held the promise of one more song.
Cyclists, joggers and pedestrians headed to Fort McHenry for the conclusion of the “Star-Spangled Spectacular” paused a half-mile to the west, where several hundred worshipers followed the invitation of Bishop Denis J. Madden and the musical lead of seminarian James O’Reilly to deliver a timely rendition of the National Anthem outside the church on Fort Avenue.
Our Lady of Good Counsel was established in 1859, well after the turning point in the War of 1812 that inspired Francis Scott Key to pen the poem that would become the Star-Spangled Banner.
As the house of worship nearest Fort McHenry, however, the community led by Father Patrick Carrion was ideally suited to pair the symbolism of the Anthem’s exact bicentennial with the feast of the Exaltation of the Holy Cross.
“Just as Americans aren’t judged by how well we sing the National Anthem,” Bishop Madden said in his homily, “Christians are not judged by how many times we make the sign of the cross, but on how we bear our cross.”
To view a slideshow from the event, navigate the arrows below.
See a photo you would like to purchase? Click here.
The Mass drew urban hipsters, tourists and old-timers decked out in red, white and blue, such as Mary Mossman, 91, who grew up on E. Clement Street, which parallels Fort Avenue.
“I was baptized here,” Mossman said, “took my first Communion here, got married here, baptized my four kids here and buried my husband here.
“Fort McHenry was part of my childhood. We used to play in the dugouts, and climb on the cannons. We went crabbing near the fireboat station. Locust Point was a great place to grow up. Everyone knew who you belonged to.”
View a video.
While Mossman headed back to her residence at a retirement high-rise on the Inner Harbor to view the Blue Angels, the U.S. Navy’s flight demonstration squad, the Conklin family buckled its two youngest into a double stroller and headed to Fort McHenry for the thrilling two-hour air show staged by six F/A-18 Hornet jets.
Brian Conklin, his wife, Theresa, and their four young children make the drive every Sunday morning from their home in Anne Arundel County to Our Lady of Good Counsel, and were not deterred by parking and traffic restrictions that accompanied one of the biggest tourism weekends in Baltimore history.
He works for the federal government in Fort Meade, and is still a reservist in the U.S. Army.
“When we were stationed in Germany, we fell in love with the old cathedrals,” Conklin said. “There’s a timeless quality to them, and we found the same thing when we first came here, in 2006.”
He has roots in Florida and his wife is a North Carolina native, and on this day they were most enthused about lingering near their home parish.
“Our faith, our faith in our nation,” Conklin said, “it all comes together today in a way it rarely does.”
Also see:
At wedding, Pope says spouses make each other better men and women
Parkville mom makes big strides in raising funds for people with autism
PrevNext