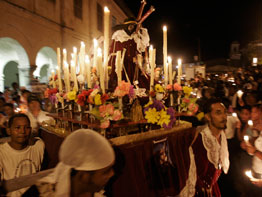 PORTOBELO, Panama – His face is dark brown like coffee. His lips and nose are thin and delicate like the Amhara people of Ethiopia. His wooden body is detailed and strong, hewn by a forgotten Spanish sculptor thousands of miles from the sweltering Caribbean village where he now rests.

Known as the “Black Christ of Portobelo,” the 17th-century statue of an African-looking Jesus has become a year-round tourist attraction and the destination of pilgrimages for tens of thousands of Latin Americans of African descent.

As transportation has improved in recent years, more and more people swarm to the annual gatherings every Oct. 21, the date the Black Christ, or Nazarene, was believed to have washed ashore. The Black Christ, warmly call “Naza” by local residents, also attracts a broad section of other people from across the continent who believe a visit will heal them or create a miracle.

Among the more unusual visitors are Hindus from Panama’s small Indian community. Many believe a local Hindu girl was cured of a dangerous disease several decades ago after visiting the statue.

Swami Jagadish at Panama City’s Hindu temple said he has no objection to the Hindu faithful venerating the Black Christ.

“They are free to make their own decisions,” he said.

Other devotees of the Black Christ have included famous singers. Giants of salsa music such as Cuban Celia Cruz and Puerto Rican Pete “El Conde” Rodriguez have visited the statue. Ismael Rivera, the Puerto Rican crooner who scored a series of hits in the United States, first visited the statue in 1975 and said the encounter saved him from a drug addiction that would have killed him.

Rivera traveled to Portobelo every October for the next 10 years and composed a song named after the statue, which became a hit in Panama. Following his death in 1987, the Portobelo community built a statue to Rivera; it now stands a few meters from his beloved Black Christ. Carved on Rivera’s statue are the lyrics of his hit song.

The faithful believe the Black Christ was brought miraculously to this Panamanian village to care for a people who lived through slavery in the Spanish empire, worked to death on the Panama Canal and still struggle in poverty-stricken communities early in the 21st century.

“They can identify with this image of Christ. They feel it gives them a special way to communicate with God,” said Father Jose Ortega Cedeno, priest at Portobelo’s St. Philip Church, where the statue is kept. “They feel that when they talk to the Black Christ, God will understand their poverty. He will understand if they have sinned or turned to crime.”

Many people on the margins of society, including criminals and drug addicts, are among those who honor the statue, Father Ortega said.

Most people believe the statue was washed up from a Spanish galleon in 1658 and landed on the beach at Portobelo, then a community of slaves working on harsh tropical plantations. It is not clear why a Spaniard carved the statue in this style. One theory is that it was made for the African population down the coast in Cartagena, Colombia, but the ship was sunk by a storm off Panama.

The Catholic hierarchy did not immediately warm to the veneration of the Black Christ and at several times over the centuries bishops did not assign priests to Portobelo, leaving the local community to pray to the statue without the approval of Rome, Father Ortega said.

But by the late 20th century, the bishops in Panama City fully endorsed the veneration, helping the annual gathering mushroom to its present size.

The modern ceremony has attracted some criticism for the bloody acts of penance undertaken; for instance, a few of the faithful drag their knees on the rocky road into the village.

Father Ortega said the acts of penance are only carried out by a handful of worshippers and are not the most important aspect of the ceremony.

“The media tend to focus on the blood rather than the other beautiful things,” he said.

In the last three annual ceremonies, some 50,000 devotees have prayed around the statue before breaking into a night of singing and dancing until dawn.

The Black Christ is dressed in a purple robe for the ceremony and put onto a huge wooden base more than 60 feet long. One hundred and fifty local men then carry the base and statue though the streets, while dancing to lively rhythms bashed out on congas.

“It is tiring to carry the heavy base. But you feel so good with the faith of the people that you forget about the pain,” said resident Alfredo Acosta, who has carried the base for 15 years. “It’s a truly beautiful ceremony.”

After the ceremony, the devotees dance through the night in the square outside the church.

However, Father Ortega said he is trying to move the frenzied party to a different location, because it spills into the church and does not have much to do with the spiritual ceremony.

Some residents are angered by the suggested move away from their statue, but others agree that people can get a bit rowdy in the square.

“Some people drink heavily and go crazy,” said Takisha de Hoyos, a 26-year old who works in the Portobelo market.