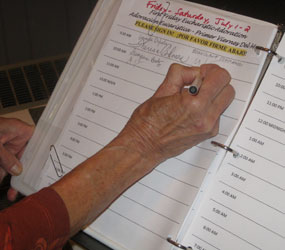 GLYNDON – Future priests were very much on the minds of worshippers at Sacred Heart, Glyndon, July 1.

Kneeling in front of a gold monstrance containing the Blessed Sacrament, the small band of worshippers silently prayed for an increase in priestly vocations. It was part of a 60-hour period of eucharistic adoration with the intention of vocations – celebrated in honor of the 60th anniversary of Pope Benedict XVI’s priestly ordination.

“We certainly need to have more priests and more nuns,” said Ann Iwicki, a Sacred Heart parishioner. “Prayer has a big impact. That’s why I’m here.”

Parishes throughout the archdiocese and around the world participated in the prayer campaign, which began on the pope’s June 29 anniversary – the solemnity of Ss. Peter and Paul. It culminated on the feast of the Sacred Heart of Jesus and the World Day of Prayer for Priests.

At the request of Archbishop Edwin F. O’Brien, nearly 30 local parishes scheduled special prayer time before the Blessed Sacrament. Perpetual adoration chapels at other parishes were also open for visitors.

Guince Merencilla, a parishioner of Shrine of the Sacred Heart in Mount Washington, joined several fellow parishioners in praying at Sacred Heart. She believes young men need to be encouraged to consider the priesthood.

Merencilla recalled that daily Mass at her parish had to be temporarily converted into a communion service when the priest who normally celebrates the liturgy needed emergency eye surgery and no other priests were available to substitute.

“It’s sad to realize,” Merencilla said. “We feel threatened to know we have an aging priesthood.”

Maria Lee, also a parishioner of Shrine of the Sacred Heart, said asking God for more priests is part of the answer to attracting more men to the vocation.

“It’s very powerful,” she said. “Prayer can change the world – it can change lives.”