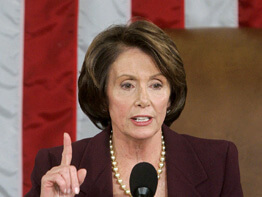 WASHINGTON (CNS) — Rep. Nancy Rep. Pelosi’s ascent to the post of speaker of the House puts her in the spotlight for a variety of “firsts.”

She’s the first woman, the first Italian-American and the first Californian to hold the post. At a Jan. 3 Mass at Trinity University in Washington, Rep. Pelosi’s alma mater, focusing on the children of Darfur and Hurricane Katrina victims, Jesuit Father Robert Drinan, a former member of Congress, noted that she’s the first mother in the seat.

But beyond the firsts, Rep. Pelosi is a well-known player in Washington with a reputation for effectively leading House Democrats and for being willing to listen to people on all sides of issues. Her selection as speaker of the House of Representatives is considered to be a good sign for the chance to pass some legislation on the church’s agenda. But Rep. Pelosi, a Catholic, also is eyed cautiously because of her record of support for legal abortion.

George Wesolek, director of the Office of Public Policy and Social Concerns for the Archdiocese of San Francisco, has worked with Rep. Pelosi and her staff for 21 years. Rep. Pelosi’s congressional district encompasses most of the city of San Francisco.

“She’s been very, very helpful on many issues and we disagree strongly on others,” Mr. Wesolek said. “And I talk with her very frankly about those.”

Rep. Pelosi, 64, was raised around politics and politicians in Baltimore — her father, Thomas D’Alesandro, was mayor there for 12 years and a member of Congress for five terms.

Growing up in Little Italy, Rep. Pelosi attended St. Leo parish and graduated from the Institute of Notre Dame in Baltimore. She went on to Trinity College (now a university), a Catholic women’s school.

After graduating from Trinity in 1962, she married California investment banker Paul Pelosi and moved with him to San Francisco. The family now belongs to St. Vincent de Paul parish in San Francisco.

Though Rep. Pelosi was involved in party politics while raising five children, it wasn’t until they were nearly grown that she took a high-profile position as chairwoman of the California Democratic Party in the early 1980s. She first ran for office in a special election at the age of 47, winning the congressional seat left vacant by the death of Rep. Sala Burton in 1987. Rep. Pelosi has been comfortably re-elected in every election since then.

She was chosen as House minority leader by the Democrats in 2002, the first woman from either party in that position. Her ability to pull Democrats together on key legislation got her re-elected to the post and put her in line to take over as speaker when the Democrats regained majority control of the House in the November 2006 elections.

Cardinal Theodore E. McCarrick, retired archbishop of Washington, said he has known Rep. Pelosi in his role as a member of the bishops’ Committee on International Policy since she first came to Washington. He said he’s always found her to be “a very thoughtful and committed defender of human rights.”

He said Rep. Pelosi is “a very bright lady who understands politics more than most people in Washington do.”

In his capacity as chairman of a bishops’ task force on Catholic politicians, Cardinal McCarrick also met with congressional Democrats after Rep. Pelosi and others asked to begin a dialogue about the role of their religious beliefs and political responsibilities.

Rep. Pelosi, whose district is about 30 percent Asian-American, has long pushed for sanctions against China for its human rights record. One Washington policy adviser said she had taken “a very gutsy position,” in opposing most-favored-nation trade status for China in the 1990s when it had broad support in Congress, in the Clinton administration and in her own party.

Mr. Wesolek said Rep. Pelosi was also among those who opposed the first Gulf War in 1991. He recalled marching with her down Van Ness Avenue in San Francisco, “arm in arm, leading 5,000 people.”

He said Rep. Pelosi also was very helpful in cutting through red tape when he and former San Francisco Archbishop John R. Quinn were denied visas to travel to El Salvador during that country’s civil war in the late 1980s and early 1990s. More recently, she’s been a supporter of a comprehensive approach to immigration reform and of increasing the minimum wage.

But Rep. Pelosi’s voting record on abortion, stem-cell research and other life issues is less than encouraging even to some members of her party — those who belong to Democrats for Life.

She said she would like to see Rep. Pelosi support with equal enthusiasm funding to preserve umbilical-cord blood for stem-cell research. The program was passed into law in 2005 but so far has not been funded, Ms. Day said.

The National Committee for a Human Life Amendment has been tracking congressional votes on a range of life issues since 1973. Of the dozens of what the group considers “key votes” since Rep. Pelosi took office, she has voted with the group’s position just once. That was considered a procedural maneuver aimed at defeating a ban on partial-birth abortion.

Mr. Wesolek and Ms. Day both said they’re encouraged by Rep. Pelosi’s comment that she wants to “rule from the middle” in the House.

“I don’t think she’s a knee-jerk-reaction person,” said Mr. Wesolek. “I think she’s very thoughtful.”
He said he gets the sense that Rep. Pelosi understands and agrees with the church’s teaching on many fundamental policy issues, but that doesn’t go far enough.

“I think she gets half of Catholic social teaching,” Mr. Wesolek said. “The half she gets she does well.”