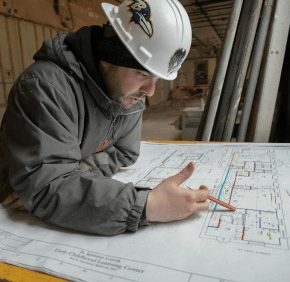 They have decided, however, that just isn’t enough.

The Loyola Early Learning Center, a pre-K institution set to welcome 18 2-year-olds Sept. 10, will become an integral part of what Jesuit Father William Watters has coined “The Jesuit Educational Ecosystem.”

“We’re trying to provide a quality education that prepares young people from the earliest age through middle and high school, and encourages them through college so they can become productive citizens – men and women who give their time and talent to their city, which needs it desperately,” Father Watters said.

The school will be located at 801 St. Paul St., one block from St. Ignatius Parish in Baltimore, where Father Watters has served two runs as pastor, the most recent from 2008 to 2015, and is now an assisting priest.

Passersby walk in front of what will be a new preschool for low-income families sponsored by the Jesuits at the corner of St. Paul and E. Madison Streets in Baltimore.  (Kevin J. Parks/CR Staff)
The Loyola Early Learning Center will operate on a model similar to those of St. Ignatius Loyola and Cristo Rey, as well as the four Catholic Community Schools of the Archdiocese of Baltimore. Donors will sponsor individual students for three-year commitments of $12,500 per year.

As the first class of 2-year-olds advances, the school will admit new students behind them, growing to the full complement of pre-K-2 through pre-K-4 classes, with 59 students in total, by September 2019.

Father Watters said he had been thinking about a preschool since his 2008 return to St. Ignatius.

“The Obama administration was banging the drum for (early childhood education), particularly for children from low-income families, and it’s true – all the data shows they can lose enormous capacity,” Father Watters said, adding that students who are behind in kindergarten can stay behind throughout their schooling, sometimes dropping out of high school as a result.

“We want to give them an opportunity to excel early on, as preschoolers, so when they arrive at kindergarten, they are competent and ready,” he said.

Father Casciotti said in an email that he sometimes sees Father Watters, who is 83, and himself as a “father-son team.”

“He has been and continues to be a mentor,” he added. “When I returned to St. Ignatius, succeeding him as pastor for the second time, I was glad to partner with him in the founding of what will be his third school.”

Thus commenced for Father Watters a sequence of, in many respects, familiar actions; he had served as point man in setting up both St. Ignatius Loyola and Cristo Rey, assembling boards of trustees and courting key donors.

This time, there is a difference.

“It’s a whole new world for me – the world of little people,” he said. “It’s like opening a door into an arena I had no idea existed.”

Loyola Early Learning Center will also serve adults, with opportunities for parents to brush up on budgeting, healthy cooking, reading to their children and more.

“Families will be signing a contract and will be investing in the school with time and talent,” Father Watters said.

He expressed gratitude toward a “host” of tuition sponsors already on board, as well as 11 founders who have pledged gifts of $250,000 toward getting the school up and running.

“I call them the 12 apostles,” Father Watters said. “The twelfth is deliberating – I’m pretty sure he’s going to do it.”

The board of trustees already has 12 members, he added, and the school has an acting director in Nancy Baker, who served as director of the preschool at Church of the Redeemer, an Episcopal church in north Baltimore.

Aurelia Burt, a teacher at St. Ignatius Loyola and a founding board member of Cristo Rey, as well as a former administrator at Roland Park Country School, is chairwoman of the Loyola Early Learning Center program committee, which among other duties develops curriculum, creates job descriptions for staff positions and produces handbooks for students, parents and staff.

The building, currently undergoing a $1.5 million renovation, was purchased by the priest in 2000, during his first pastorship at St. Ignatius.

“It’s the old Ma Bell (telephone company) building,” he said. “I bought around seven buildings while I was pastor, because they were good buys.”

With two teachers and two aides for each grade, as well as administrative and development staff and a social worker, the preschool will employ about 17 people once the three grades are established.

Father Watters emphasized that the preschool will be “a Catholic school and a Jesuit school,” opening the day with prayer and teaching children to “center themselves on God from an early age,” and it will serve those in need, regardless of their faith.

“This is what Catholics do,” he said. “They try to provide education to all people, but in a special way to those who don’t have the financial capacity to obtain a quality education.”