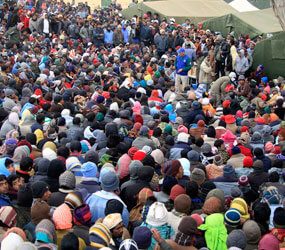 DHAKA, Bangladesh – The Catholic Church in Libya is offering shelter to stranded Bangladeshi migrant workers following an appeal by concerned bishops in their homeland.

“The government is struggling to repatriate thousands of migrant workers and we can’t help them directly. With the assistance of the Vatican Embassy in Dhaka, we asked the Libyan church via the Italian bishops’ conference to shelter Bangladeshis,” said Bishop Gervas Rozario of Rajshahi, chairman of the bishops’ justice and peace commission.

“Since our appeal, several churches in Libya are currently sheltering many Bangladeshi migrants,” the bishop said. His remarks were reported March 9 by the Asian church news agency UCA News.

Reports say approximately 89,000 Bangladeshi migrant workers remain in Libya, where protesters are embroiled in a conflict to oust dictator Moammar Gadhafi. About 5,500 workers have returned to Bangladesh so far and at least five were killed.

The Bangladeshi Labor Ministry has expressed regret that it can only bring home around 25,000 with help from the International Organization for Migration.

“Returning home means landing in heaven from hell for me. I’ve left everything in Libya, but I’m happy to get home in one piece,” said Sentu Richard Gomes, 27, a Catholic who returned to Bangladesh in early March.

“In Libya, around 100 rebels attacked us, stole everything we had and torched the building we were hiding in. We had no choice but to flee. I fled to Egypt, starved for days and then came back to Bangladesh with help from the IOM,” Gomes said.

Thousands of migrant workers from other Asian countries are still waiting to come home.

According to the Philippine government, around 12,000 of the estimated 26,000 Filipinos in Libya have left the country, but only about 4,000 having actually arrived back home.

Of the estimated 18,000 Indians in Libya when the violence began, around 1,700 are reportedly still awaiting evacuation.

Meanwhile, around 7, 500 of a reported 23,000 Thai workers had returned home, but the Thai Foreign Ministry said March 7 it was still trying to contact around 1,000 migrants still believed trapped.