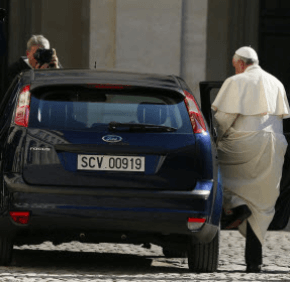 By Cindy Wooden
Catholic News Service
VATICAN CITY – From the moment Pope Francis, dressed simply in a white cassock, stepped out on the balcony of St. Peter’s Basilica for the first time and bowed, he signaled his pontificate would bring some style differences to the papacy.
Some of the style changes are simply a reflection of his personality, he has explained. Others are meant to be a lesson. But sometimes the two coincide.
Answering questions from students in June, he said the Apostolic Palace, where his predecessors lived “is not that luxurious,” but he decided to live in the Domus Sanctae Marthae, a Vatican guesthouse, “for psychiatric reasons.”
Living alone or in an isolated setting “would not do me any good,” he said, because he’s the kind of person who prefers living in the thick of things, “among the people.” However, he added that he tries to live as simply as possible, “to not have many things and to become a bit poorer” like Christ.
Unlike his choice of residence, his decision to travel in Rome in a blue Ford Focus instead of one of the Mercedes sedans in the Vatican motor pool was meant to be a message.
Meeting with seminarians and novices in July, he said too many people – including religious – think joy comes from possessions, “so they go in quest of the latest model of smartphone, the fastest scooter, the showy car.”
“I tell you, it truly grieves me to see a priest or a sister with the latest model of a car,” he said. For many priests and religious, cars are a necessity, “but choose a more humble car. And if you like the beautiful one, only think of all the children who are dying of hunger.”
A few days after his election, Pope Francis told reporters who had covered the conclave, “How I would like a church which is poor and for the poor.”
In October, he traveled to the birthplace of St. Francis of Assisi and met clients of Catholic charities in the room where St. Francis had stripped off his cloak and renounced his family’s wealth. The pope said he knew some people were expecting him to say or do something similarly shocking with the church’s material goods.
Living simply is important, he said, not just out of solidarity with the poor, but because it is so easy to get attached to worldly possessions, turning them into idols. The church, he said in Assisi, “must strip away every kind of worldly spirit, which is a temptation for everyone; strip away every action that is not for God, that is not from God; strip away the fear of opening the doors and going out to encounter all, especially the poorest of the poor, the needy, the remote, without waiting.”
The first year of Pope Francis’ pontificate also has been one of encounters.
A pope, like priests around the world, celebrates Mass every day. Before he became very infirm, Blessed John Paul II would invite visiting bishops and special guests to attend his early morning Mass in the chapel of the papal residence. Pope Benedict XVI’s morning Mass generally was more familial, including his secretaries, his butler and the women who ran the apartment.
With a much larger chapel in the Domus Sanctae Marthae and more priests and bishops in residence there, Pope Francis has had a larger congregation for his morning Masses. Although the Masses are considered private by the Vatican, Pope Francis has been inviting Vatican employees to attend, beginning with the garbage collectors and gardeners.
While transcripts of his morning homilies are not printed in the Vatican’s official daily news bulletin, excerpts are provided by the Vatican newspaper and Vatican Radio.
In the first months of his papacy, especially as the weather warmed up, he’d go for a walk, dropping in on Vatican workers in the garage or the power plant. And, when he has a request of a Vatican office or wants to make sure something he requested is being done, he simply picks up the phone.
Every Vatican office – not to mention the Jesuits and other religious orders – has a funny story about someone answering the phone and thinking it’s a joke when they hear, “This is Pope Francis.”
But his phone calls go well beyond the inner circle of the Vatican and the church. Pope Francis has called journalists and people either he has read about or who have written to him with stories of suffering and desperation. His telephone calls, in some ways, have taken the place of his Buenos Aires habit of riding public transportation and walking the streets of the poorer neighborhoods to stay in touch with how people really live.
While he will pose with pilgrims for photos and “selfies,” reciprocate when given a big hug, sign autographs for children and accept cups of “mate” – an herbal tea popular in parts of Latin America – he learned in Argentina that there are times when the ministry of an archbishop or pope can be used by the powerful, and he has taken steps to make sure that does not happen.
At his morning Mass and at his large public liturgies, Pope Francis gives Communion only to the altar servers and deacons, then he sits down and prays.
In a 2010 book written with Buenos Aires Rabbi Abraham Skorka, Pope Francis said that at large Masses for special occasions – Masses attended by government officials and leading business people – “I do not give Communion myself; I stay back and I let the ministers give it, because I do not want those people to come to me for the photo op. One could deny Communion to a public sinner who has not repented, but it is very difficult to check such things.”
Also see:
Thumbs up for Pope Francis
Movie Revew: Son of God
Pope: Anointing of the sick doesn’t bring bad luck, it brings Jesus
Copyright (c) 2014 Catholic News Service/U.S. Conference of Catholic Bishops
PrevNext