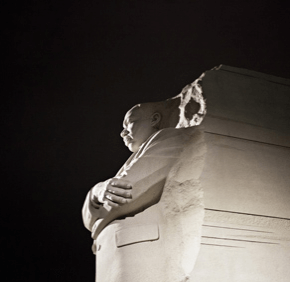 By Catholic Review Staff
The Rev. Dr. Martin Luther King Jr. would have turned 85 Jan. 15. The Civil Rights activist, who will be remembered nationally on his federal holiday Jan. 20, was one of the leading proponents of nonviolence, justice and peace. Here are some of his most inspiring quotes:
“Nonviolence is absolute commitment to the way of love. Love is not emotional bash; it is not empty sentimentalism. It is the active outpouring of one’s whole being into the being of another.”
– 1957
“Injustice anywhere is a threat to justice everywhere.”
– April 16, 1963
“I submit to you that if a man has not discovered something that he will die for, he isn’t fit to live.”
–  June 23, 1963
“I have a dream that my four little children will one day live in a nation where they will not be judged by the color of their skin, but by the content of their character.”
–  Aug. 28, 1963
“We refuse to believe that the bank of justice is bankrupt.”
– Aug. 28, 1963
“Man must evolve for all human conflict a method which rejects revenge, aggression and retaliation.”
– Dec. 10, 1964
“I believe that unarmed truth and unconditional love will have the final word in reality. That is why right, temporarily defeated, is stronger than evil triumphant.”
– Dec. 10, 1964
“The ultimate test of a man is not where he stands in moments of comfort and moments of convenience, but where he stands in moments of challenge and moments of controversy.”
– Jan. 27, 1965
PrevNext