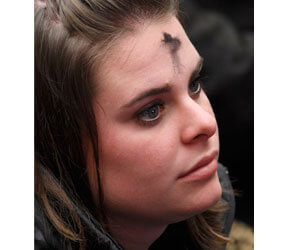 VATICAN CITY – Wishing all Christians a “happy Lenten journey,” Pope Benedict XVI said fasting, almsgiving and prayer are traditionally suggested for Lent because they have proven to be effective tools for conversion.

Lent is a time “to accept Christ’s invitation to renew our baptismal commitments” in order to arrive at Easter in a new and stronger state, the pope said at his weekly general audience March 9, Ash Wednesday and the start of Lent for Latin-rite Catholics.

“This Lenten journey that we are invited to follow is characterized in the church’s tradition by certain practices: fasting, almsgiving and prayer,” he told the estimated 7,000 people gathered in the Vatican audience hall.

“Fasting means abstaining from food, but includes other forms of self-denial to promote a more sober lifestyle. But that still isn’t the full meaning of fasting, which is the external sign of the internal reality of our commitment to abstain from evil with the help of God and to live the Gospel,” Pope Benedict said.

In the church’s tradition, he said, “fasting is tied closely to almsgiving” and is the sign that after having given up an attachment to things and to sin, the Christian has embraced good works.

“Lent is also a privileged time for prayer,” the pope said. He quoted St. Augustine, who described fasting and almsgiving as “the two wings of prayer,” because they are signs of humility and charity.

Pope Benedict said, “The church knows that because of our weakness it is difficult to be silent and sit before God,” even though we are “sinners who need his love.”

“For this reason, during Lent, the church invites us to be more faithful and intense in our prayer and to meditate at length on the word of God,” the pope said.

The Lenten period is the church’s gift to Christians to help them prepare to truly celebrate Easter, Pope Benedict said.

“In order to reach the light and joy of the resurrection, the victory of life, love and goodness, we, too, must take up our cross each day,” he said.

“The first step toward a correct relationship with the world around us,” the pope said, is to recognize that human beings are creatures made by God.

“Man is not God, but his image, so he should try to be more sensitive to the presence of God in what surrounds him: in all creatures and especially in other human beings,” the papal message said.

Respect for the environment will never be complete without respect for and “a clear defense of human life from conception to natural death, without a defense of the family based on marriage between a man and a woman, without a real defense of those who are excluded and marginalized by society” and without concrete care of those impacted by natural disasters, he said.

The text of the pope’s audience remarks in English will be posted online at: www.vatican.va/holy_father/benedict_xvi/audiences/2011/documents/hf_ben-xvi_aud_20110309_en.html.

The text of the pope’s audience remarks in Spanish will be posted online at: www.vatican.va/holy_father/benedict_xvi/audiences/2011/documents/hf_ben-xvi_aud_20110309_sp.html.