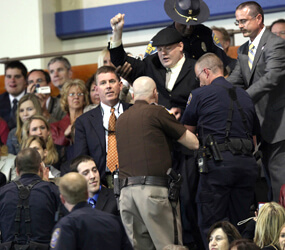 WASHINGTON – A year after the fractious conflict over the University of Notre Dame’s decision to invite President Barack Obama to be its commencement speaker and give him an honorary degree, some protesters still face charges.

However, a majority of the demonstrators arrested while protesting Obama’s commencement address at the Indiana school have been offered the option of a pretrial diversion program, which, if successfully completely, would lead to dismissal of the charges.

Many Catholics had said Obama was an inappropriate choice for an honorary degree at the nation’s most recognizably Catholic university because of his support for keeping abortion legal.

While some have argued that campus police showed bias by arresting only pro-life protesters, and leaving alone pro-Obama demonstrators who support keeping abortion legal, Father Jenkins said only people who disobeyed the university’s protest policies were charged.

“They were given repeated warnings by law enforcement officials, and then, when they persisted, they were arrested and charged with criminal trespass,” he said in a statement released April 30.

Thomas Brejcha, president and chief counsel of the Thomas More Society, a public-interest law firm, told the national Catholic weekly Our Sunday Visitor that he believes there is evidence that Notre Dame engaged in “viewpoint discrimination” and singled out some of those arrested “for especially harsh treatment.”

The university requires all campus demonstrations be organized by a student, faculty or staff member, receive approval from the Office of Student Affairs, and be peaceful and orderly, Father Jenkins said.

“Those who were arrested last spring met none of these criteria and, in particular, were led by individuals who threatened peace and order by promising upheaval on our campus,” he said.

“Several pro-life demonstrations that met our criteria were held on campus before and during commencement. Those now charged with trespass could have joined these protests without interference or arrest,” Father Jenkins said. “They were highly publicized, easily accessible and well attended.”

Catherine Wilson, a spokeswoman for the St. Joseph County Prosecutor’s Office, said a majority of the 106 protesters arrested were eligible for the pretrial diversion program offered by Dvorak. Those who waive trial, have no criminal record and stay out of trouble for one year will avoid a criminal conviction, she said.

Those with a criminal record will not be eligible for this program, Wilson said.

As of April 5, three of the Notre Dame protesters have agreed to enter the pretrial diversion program, she said.

“While Notre Dame has in the past banned from campus those who have been arrested for trespass, the university will waive that penalty for those who complete the pretrial diversion program, are acquitted of charges or plead guilty,” Father Jenkins said.

He said the university’s position on abortion was misinterpreted during the heated debate surrounding Obama’s presence on campus.

“We at Notre Dame embrace the Catholic position on the sanctity of life,” Father Jenkins said.”We oppose abortion, and support laws that protect life from conception to natural death. In this respect, we fully agree with the protesters.”

He also said the university supports public debate on and off campus and encourages students to voice their opinions. But Father Jenkins said the university has procedures that must be followed to ensure demonstrations are safe and peaceful, and those who were arrested didn’t follow proper protocol.

“We must insist on maintaining the order that allows students, faculty and staff to learn, inquire and conduct the business of the university,” he said. “It is this dual commitment to free expression and public order that has guided us in this case.”