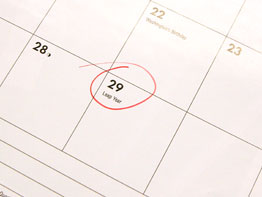 Since Feb. 29 only falls on the calendar every four years, Sherry Strickler of Fort Meade rarely thinks about the unusual date – but she’s thinking about it in 2008.

The 40-year-old parishioner of Our Lady of Peace, Fort Meade, was surprised to learn that Pope Gregory XIII is actually responsible for establishing the modern-day calendar, which adds an additional day every fourth year.

In 1582, Rome promulgated the Gregorian calendar, which includes a leap year every four years to correct the quarter-day difference between the date and actual time the Earth rotates around the sun annually.

Though the modern-day calendar holds 365 days, it takes the planet slightly more time to rotate around the sun, said Ray Villard, news director for the Space Telescope Science Institute, the Baltimore organization that operates the Hubble Space Telescope.

“That is why leap year is every four years,” said Mr. Villard, 57, of Eldersburg who is a parishioner of St. Joseph, Sykesville. “The orbital time for the Earth to rotate around the sun is actually 365.24 days. So, leap year is catch up.”

Without the leap year, the seasons would eventually be off, he said.

However, the Gregorian calendar eliminates leap year three times every 400 years – for example, in 1900 – because the Earth doesn’t rotate exactly 365.25 and loses a day every 130 years, Mr. Villard said.

Within decades, Protestant regions of Germany and the northern Netherlands adopted the new calendar, but it didn’t take hold in the British-ruled American colonies until the mid-18th century.

Although many Catholic feasts have exact dates on the calendar, Lent and Easter must coincide with Passover – when Christ’s Passion took place. Passover is based on how the first full moon relates to spring, said Father Brendan Hurley, S.J., associate pastor of St. Ignatius, Baltimore, which is why Easter is celebrated in March some years and April in others.

“Easter is the first Sunday after the full moon, after the vernal equinox (the first day of spring),” Father Hurley said. Back up 47 days and that’s when you schedule Ash Wednesday, the beginning of Lent, he explained.

Though the calendar is a relevant factor in the Catholic faith, spirituality often transcends time, he said.

“Participation in the Mass is certainly in the context of the community in time and place, here and now,” Father Hurley said. “We do want parishioners to show up on time for Mass.”

However, in the Eucharist – when Catholics memorialize the last supper of Jesus – time is melded into the past, present and future, he said.

“It’s a transcending of the liturgy, which is a participation in eternity,” Father Hurley said. “It is one dimension of the church’s view of our spiritual, liturgical and sacramental life.”