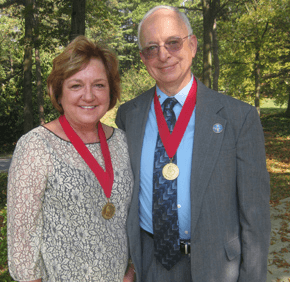 By George P. Matysek Jr.
gmatysek@CatholicReview.org
Twitter: @reviewmatysek
Reflecting on his retreat ministry working with men and women whose lives have been wounded by abortion, Deacon Francis Zeiler struggled to contain tears.
“What they are going through is horrible,” said the white-haired clergyman, still wearing the Culture of Life Medal of Honor that had been draped around his neck moments earlier during the annual Respect Life Mass celebrated by Archbishop William E. Lori Oct. 6 at the Cathedral of Mary Our Queen, Homeland.
“When you go on these retreats,” Deacon Zeiler said, “you take these men and women by the hand and you assume part of their hurt, their pain.”
By the end of the retreats, he said, many who came in fear and sadness left with a sense of peace and healing.
“After we give them the opportunity to name their child and have a little service for the children,” Deacon Zeiler said, “they are different people.”
Deacon Zeiler, stationed at St. Clement Mary Hofbauer in Rosedale, was honored for his many years of pro-life work, along with Denise Douglas of St. Mark in Catonsville. The pair has been active in Rachel’s Vineyard-Baltimore, a post-abortion healing program.
Douglas, a registered nurse, is the former coordinator of Rachel’s Vineyard-Baltimore. Four annual weekend healing retreats began under her leadership, and she also assembled a referral list of clergy and counselors. She recently stepped down after nine years as coordinator.
“The retreats are powerful because they take people out of isolation,” Douglas explained. “You really need to heal in a community setting. It’s just awesome to see how God works.”
Many of those who have attended the retreat have later become involved in their churches or the pro-life movement, she said.
“They refer others to come for healing,” she said.
In addition to working with individuals hurt by abortion, Deacon Zeiler has served as clergy liaison to educate priests, deacons and seminarians about right-to-life issues and post-abortion healing. When he preaches on abortion, the deacon said he emphasizes God’s love and mercy. Through his direct preaching at Mass, six women have sought healing for past abortions.
“We need to tell them that God loves them and he wants them back,” Deacon Zeiler said.
During the Respect Life Mass, which attracted people from throughout the archdiocese, students from 11 Catholic high schools and several area universities participated.
“The more we are overtaken by God’s love, the more we become the Lord’s disciples, the better equipped we are to proclaim and bear witness to the Gospel of life,” Archbishop Lori said in his homily.
Those who are not convinced of the sanctity of life can experience that same love, he said, noting that no one is beyond the mercy of God.
“When, in faith, they begin to see the truth about God’s love for each person, then maybe their minds and hearts might be open to see the value of human life at every stage,” Archbishop Lori said.
The archbishop noted that since Roe v. Wade, more than 55 million unborn children have lost their lives to abortion, “leaving millions of mothers, fathers and family members wounded and grieving over their loss.”
He also noted that physician-assisted suicide is now legal in three states, “allowing doctors to end lives rather than provide much-needed comfort in times of pain and distress.”
Deacon Zeiler said he plans to use whatever time he has left in ministry to further respect for life.
“I think in this world, all the problems we’ve got are because we don’t have that foundation of faith,” he said. “We need to bring God into their lives.”
See also:
October is Respect Life Month
Cord blood donation is free and easy, but still a challenge for Mercy, St. Agnes
PrevNext