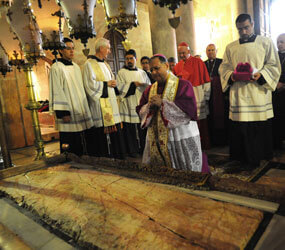 JERUSALEM – The confluence of the Eastern and Western Christian calendars that leads to a common celebration of Christ’s resurrection this year is a “symphony that expresses the unity of faith,” said Latin Patriarch Fouad Twal in his Easter homily at the Church of the Holy Sepulcher.

“This year, then, our joy is double. It is the same voice. The Christians of the world shout out today in a loud voice: ‘Christ is Risen!’ ” he said during Mass April 4 at the church built on the site believed to be Christ’s tomb.

Describing the coinciding celebrations which brought tens of thousands of pilgrims to Jerusalem’s Old City as a “joyful celebration,” the patriarch said Christ’s resurrection marked “the Lord’s victory over evil and death.”

“Today more than ever we need hope and a special kind of strength in order to conquer the evil that is within us and around us,” he said, recalling the solidarity which the world was able to show to the tens of thousands victims of the recent earthquakes in Haiti and Chile.

He noted that similar solidarity has been shown to Holy Land Christians during difficult periods they have faced, helping strengthen their hope.

Although the many wars, conflicts and incidents of religious intolerance and persecution often directed against Christians seem to signal the victory of “the prince of darkness,” the opposite is true, Patriarch Twal said. He reassured the faithful, reminding them of Jesus’ words in John’s Gospel: “Now the ruler of this world will be driven out and when I am lifted up from the earth, I will draw everyone to myself.”

Christians must testify to their faith not only by the spoken word but with their very lives, he said.

“We will be witnesses not only by word, but by our lives, with sanctity and universal love, with our patience and our enduring in the Holy Land beside the holy places,” the patriarch said.